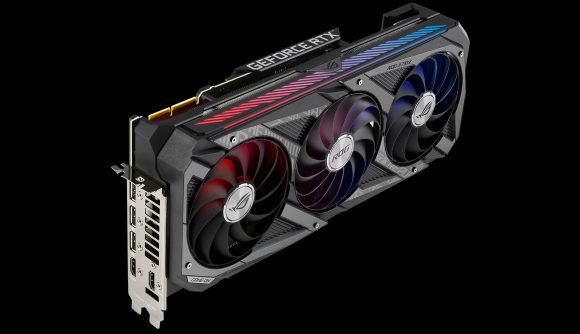 Nvidia launched its RTX 30 series back in September at an impressively low price point, but the line-up was far from complete with just the RTX 3070, 3080, and 3090 under its belt. Rumours and whispers didn’t instill confidence, either, first teasing a 20GB upgrade for the RTX 3080 before promptly taking it away. But now, it seems as though the graphics card is, in fact, on its way, with Asus leaking the coveted RTX 3080 Ti with no less than 20GB of memory.

Set to arrive as part of Asus’s flagship ROG Strix range, two models of the RTX 3080 Ti were spotted on the company’s graphics card support page by known leaker HXL, otherwise known as 9550pro on Twitter. These weren’t the only nuggets to be found, as the database also listed two entries for the upcoming RTX 3060, which looks to pack 12GB of GDDR6 memory – something previously discovered by Igor’s Lab.

Adding fuel to the fire, these entries have since been removed despite not leading anywhere when they were live.

The ‘O20G’ and ‘O12G’ models are presumably the factory overclocked ‘OC Editions’ we’re used to seeing from Asus, while the other two are likely standard versions without the company pushing the clocks to their limit.

If there’s truth to these leaks, the RTX 3060 will sit in a strange place compared to the 8GB RTX 3060 Ti, 8GB RTX 3070, and 10GB RTX 3080 already on the market. According to previous reports, there is supposedly a 6GB RTX 3060 in the works that would follow the usual logic and slot into the roster seamlessly, but there’s no sign of that here.

The all-but-confirmed RTX 3080 Ti, on the other hand, is best considered a stripped RTX 3090 – a card that leans more towards professionals than gamers with 24GB of memory and a chonky $1,499 / £1,399 price tag. But without official word from Nvidia or its board partners, it’s best to take this information with a pinch of salt for now.