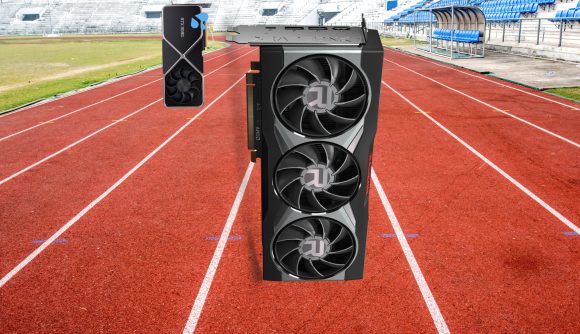 The Nvidia GeForce RTX 3090 Ti may be one of the best graphics cards, but the AMD Radeon RX 6950 XT could potentially snatch its crown. Leaked benchmarks shared by Wccftech suggest that the red team’s RX 6000 refresh can outpace the current-gen titan, and its 6750 XT and 6650 XT counterparts also pack a punch.

According to the benchmarks, the RTX 3090 Ti falls behind the Radeon RX 6950 XT, as the AMD GPU achieves a Time Spy graphics score of 22,209. Nvidia’s frontrunner achieves 20,855 when put through the same test, while the 6900 XT only manages to hit 18,463 points. In theory, this means the AMD newcomer is 6% faster than the green team’s flagship, but we’ll have to wait for additional benchmarks to surface before knowing if this is truly the case.

The early benchmarking tests also put AMD’s 6750 XT and 6650 XT through their paces, giving us an idea of what to expect from the RX 6000 series refresh. The 6750 XT seemingly sits somewhere between the RTX 3070 and RTX 3070 Ti in terms of performance, while the 6650 XT ranks above the RTX 3090 Ti. However, it’s worth noting that in 3DMark Port Royal tests, Nvidia manages to come out top across the board, something that’s attributed to the RTX 3000 range’s ray tracing cores.

The AMD Radeon RX 6950 XT may give Nvidia a short term reason to sweat, but the arrival of RTX 4000 and RDNA 3 graphics cards will change the playing field entirely. Sure, the RTX 3090 Ti might find its throne usurped, but if the RTX 4090 manages to smash the 100 teraflops ceiling, it’ll quickly regain dominance within the gaming PC scene.

Of course, Nvidia and AMD aren’t the only competitors in the next-gen race, as Intel Arc Alchemist contenders are already charging into battle. While the blue team’s first GPU platoon is probably better equipped to take on current-gen opponents, the company plans on releasing new cards every year up until 2025. Whether or not this will actually happen remains to be seen, but the brute performance of the RTX 4090 paired with AMD’s Radeon RX 7900 XT PCIe 5.0 capabilities suggest Intel will need to pull some fancy tricks to survive this graphics card scrap.