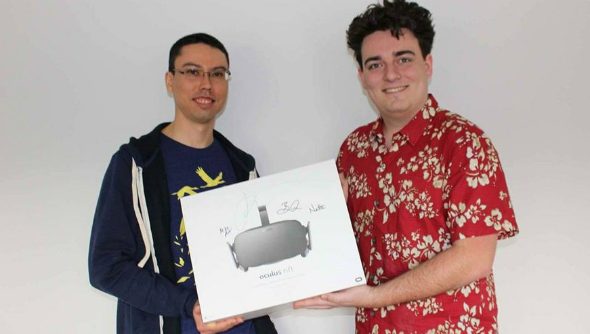 Oculus founder Palmer Luckey flew out to Anchorage, Alaska on Saturday to hand-deliver the Oculus Rift to its very first pre-orderer: Ross Martin.

If you’re still in need of the hardware for the future, here’s a guide on how to build a VR-ready PC.

Martin, a software developer at Axiom Data Science, was handed the first consumer Oculus Rift by Luckey himself, clad in signature Hawaiian shirt, shorts and sandals despite the sub-Arctic region’s frigid spring temperatures.

The ceremonious occasion was streamed live on Facebook, for obvious parental company privilege reasons, as Martin spoke a little about himself after receiving the signed box.

It wasn’t as awkward as it sounds, Luckey seemed genuinely excited to be talking to a long-time fan (Martin has followed Oculus’ updates on the Rift since its first dev kit) and also learning about Alaska. He, unsurprisingly, didn’t know much about the forgotten state, his only prior exposure being the family movie “Snow Dogs” enlightening him to the existence of dog sleds.

Luckily, Martin appeared to be something of an Alaskan trope and his parents were dog sledders who competed in the annual race, the Iditarod, featured in the same Disney movie. Perhaps that’s an avenue to explore for future VR experience developers.