Oculus is reportedly planning a moderate update to its original Rift design called Rift S – potentially launching in 2019. The new headset will bump up resolution and replace external tracking hardware with an inside-out system. But is that going to satiate VR enthusiasts? I’m not so sure.

Oculus, a Facebook subsidiary, first launched the Oculus Rift in 2016. The headset swiftly gained popularity, although virtual reality adoption as a whole was arguably slower than hoped. The company has since taken a new direction, moving into lightweight standalone VR devices, starting with the Oculus Go and recently joined by the Oculus Quest.

These devices are a sign of the company’s push towards accessibility, specifically with a look to bring 1 billion people into VR in the long-term. But the transition hasn’t been easy for Oculus, recently losing one of its co-founders, Brendan Iribe, due to a disagreement about the future direction of its VR headsets. Iribe was working toward a Rift 2 headset, codename Caspar, but left shortly after the project was canned.

And that led to the ‘Rift S’, TechCrunch reports, at least the potential name of a device that tows the line between truly high-end VR tech and accessibility. Insider sources report that resolution will increase from the first-gen Rift’s 2,160 x 1,200 OLED displays, and that the ‘Constellation’ tracking hardware of the current gen device will be replaced by inside-out tracking. 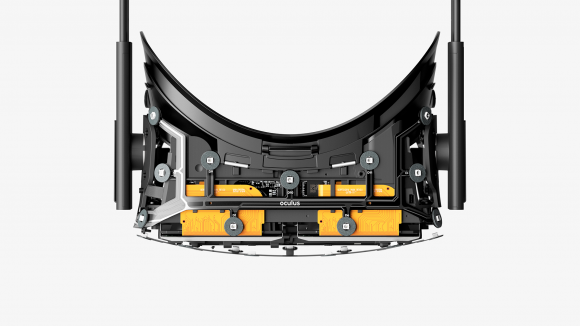 Inside-out tracking utilises sensors on the headset to measure movement. Both the Oculus Rift and HTC Vive utilise external sensors to function, necessitating extra time, space, and, occasionally, equipment such as stands to set up. Oculus Go and Oculus Quest both utilise inside-out tracking.

But the built-in headset tracking solution isn’t always as accurate or responsive as external tracking systems. It also somewhat limits controller tracking to the rear of the headset. While the mainstream VR market might celebrate the change, it seems like the enthusiast VR market may fall by the wayside for Facebook’s virtual reality arm.

When asked about whether Oculus would consider a high-end headset to compete with HTC’s Vive Pro, Oculus co-founder Nate Mitchell acknowledge the company “would not at all rule that out”.

“While we don’t comment on rumors/speculation about our future products,” an Oculus spokesperson tells TechCrunch, “as we shared last week, PC VR remains a part of our strategy and is a category we will continue to invest in. In addition to hardware, we have a robust software roadmap and are funding content well into 2020.”

HTC only today announced it would be joining the VirtualLink consortium. This is a group of market leaders in all aspects of virtual reality, including AMD, Nvidia, Oculus, Microsoft, and now, HTC. The consortium is attempting to create an open standard for a USB Type-C connection capable of providing a VR headset with the power and data required to function. Nvidia has already employed the standard within its RTX 2080 Ti, RTX 2080, and RTX 2070 graphics cards.

It wasn’t long ago I wrote about how the next generation of virtual reality headsets might be a long way off. Will Oculus Rift S be the first to qualify for the next-gen title next year, proving me swiftly wrong, or, like the HTC Vive Pro, fall short? I’d much prefer to be wrong than vindicated by a half-step that falls short of expectations in an effort to cater to a wider audience, but we’ll have to wait and see.