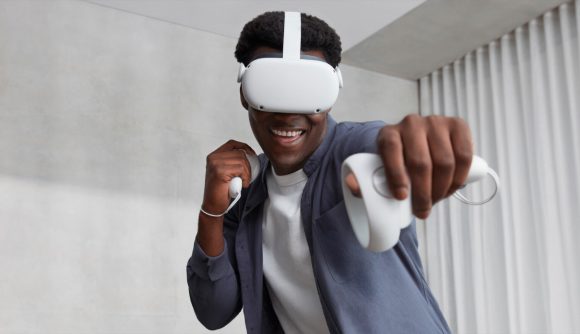 The Oculus Quest 2 is undoubtedly one of the best VR headsets on the market, but its tracking capabilities are limited to just head and hand movements. However, this could change in the near-future, following an update to Quest 2 developer documentation by Meta.

Changes made to Unity development resources for the Quest 2 included a screenshot of an Oculus SDK that contained a dropdown for ‘Body Tracking Support’. We say ‘included’ as Meta quickly pulled the image, but not before UploadVR was able to grab a copy. It’s unclear how body tracking could be implemented on the Quest 2, as the headset’s downward facing cameras are unlikely to be up to the task.

This could be an indication that the company plans to introduce this functionality to its upcoming Project Cambria or Oculus Quest 3 headsets. Alternatively, Meta could be concocting its own competitors to the Vive Tracker 3.0, as part of its plans to dominate the metaverse and gaming VR space.

Welcome as full body tracking would be on the Oculus Quest 2, the most recent Steam Hardware survey suggest the feature’s absence isn’t impacting its popularity.

That said, VR’s rising popularity is also leading to an increase in ‘gorillla arm’ injuries. So, you’d do well to manage your time with the best VR games, lest you wish to suffer shoulder strain.