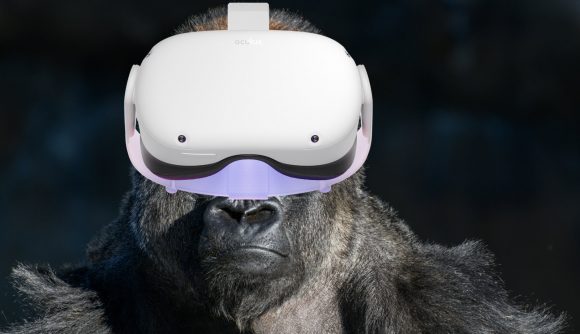 Virtual reality is more prominent than ever within the gaming PC scene, and VR headsets like the Oculus Quest 2 offer high-quality immersion at an approachable price. Yet, according to ergonomic health experts, delving into the metaverse could come with real-world repercussions, as you might end up developing an injury dubbed “gorilla arm.”

As reported by The Times, gorilla arm is a term used by the Occupational and Biomechanics Research Laboratory at Oregon State University to describe a VR-related ailment. According to associate professor Jay Kim, extending your arms in virtual games “can increase the shoulder strain in a way that’s different from conventional workstations. By sticking your arms forward far away from your body, that creates shoulder strain that’s called gorilla arm syndrome.”

Gorilla arm is hardly comparable to the ‘you die in the game, you die for real’ premise of the movie horror Stay Alive, but it could become an RSI risk for players as we venture forth into a VR gaming future.

Repetitive strain injuries and ailments aren’t the only dangers tied to VR gaming. The Times’ report also draws attention to a VR to ER Reddit thread that includes user-submitted injuries while wearing a headset. From punching furniture while boxing to falling face-first on the floor, VR tech is perhaps riskier than you’d think.

Naturally, VR innovators are always looking for ways to improve the experience and accessories like Ekto VR’s boots could help prevent furniture fights in the future. Of course, expensive footwear doesn’t solve the emerging issue of gorilla arm, so we’ll need to see what the industry comes up with to prevent neck and shoulder injuries while jaunting around the metaverse.