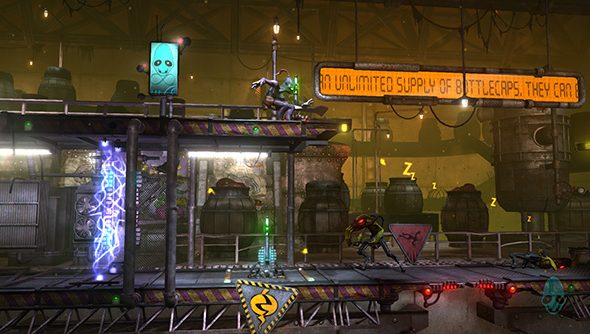 The PC version of farting and waving simulator Oddworld: New ‘n’ Tasty has at last been given a release date. The remake of PS1 side-scrolling classic Abe’s Oddysee launched last summer on PlayStation 4, before sitting there and teasing everybody by not being available on PC for absolutely ages.

Mac and Linux versions will be arriving on the same day, if you’re so inclined, and all versions will be adorned with the post-launch improvements made to the PlayStation 4 version since its release in July of 2014, including old school control settings.

The game is about an unfortunate chap called Abe, who discovers that his enslaved species is scheduled to become a soylent snack for a sinister race of boardroom executives looking fellas, and so sets off on an adventure to free his pals using his fancy enemy-possessing powers and switch-pulling arms. It’s a highly original side-scrolling action puzzle platformer, and the glossy high-def remake has received positive reviews across the board.

Oddworld: New ‘n’ Tasty will sell on Steam for £15, with a 10% discount available if you pre-purchase.