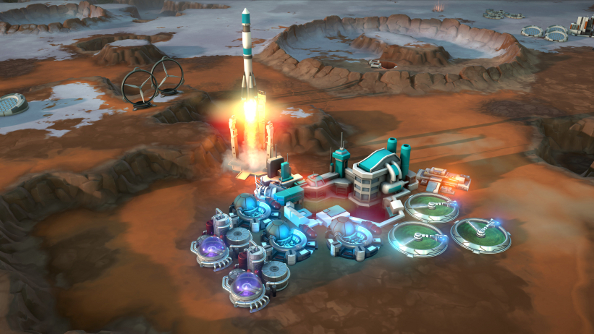 Offworld Trading Company is heading to Jupiter’s volcanic moon, Io, in its first expansion. Here, in this harsh, magma-covered environment, survival will be much tougher for those playing through Mohawk Games’ RTS.

Check out our list of the best strategy games for more tactical titles.

“The further out into space we go, the harder survival becomes,” says the official blurb, via GameSpot.

“Unlike Mars, Io’s resources are finite and will deplete over time, which makes the competition even more cutthroat. Players will have to adapt to an entirely different resource hierarchy than they’ve become used to on Mars or Ceres if they want their businesses to survive here.”

There will be new buildings to construct, new factions to tackle – the Penrose Collective and the Diadem Trust – and a new resource, Basalt. You’ll be mining that resource under the threat of landslides, tremors, radiation storms, and sulfur frosts.

If that’s not enough challenge for you, there’s a new mode in the 1000 Map Challenge, a series of (I’m sure you can guess the number) maps that get harder with each one conquered.