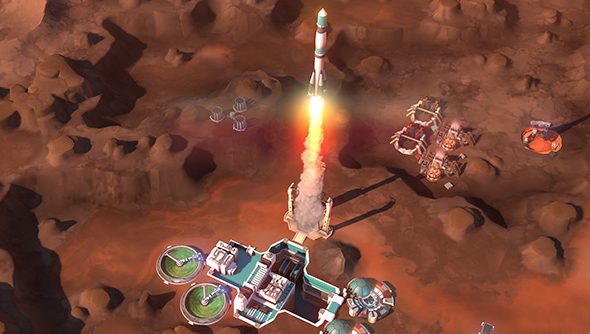 I’ve wanted to play Offworld Trading Company for a while now. It’s a combat-free sci-fi RTS with a focus on trading and definitely not any fighting, and somehow, perhaps due to my love of shooting and punching, I haven’t given it a go yet.

If you’re more after bang than bucks, why not try our list of the PC’s best strategy games?

Today, maybe, is the day. The Mars-set trade-em-up leaves early access in a little over two hours from nowat 8pm BST / 11am PST, meaning that it’s crossed the invisible line between pre and post release. There’s pedigree behind it – it’s created by Soren Johnson, best known as the lead on beloved strategy game Civilisation 4 and published by Stardock, with Johnson’s Mohawk games bringing his vision to life.

It’s a funny sort of RTS. There are no units, but you focus on buildings, trade routes, sneaky deals and buyouts and it supposedly gives you the same sense of breathless panic that categorises the shootier strategy games. You’re still trying to crush your opponents beneath your heel you see, it’s just you’re aiming to give them a business offer they can’t refuse instead of 6000 angry tanks.

There’s a multiplayer, if you want to show economic supremacy over your friends. You can pick the full game up on Steam or Stardock’s store a bit later today. Version 1.0 benefits from a “refine and polish” and no doubt will launch with some shiny patch notes for those of you that’ve been following it through development.