The game has a robust control scheme, with you moving the left thumbstick to initiate one of a giant catalogue of jumps, and then hitting A a fraction of a second before hitting the ground to properly land the trick. You jump, you land, you maintain momentum. Sloppy landings slow you down, break your combo and stumble your skater.

Grind rails can be slid along by holding the thumbstick in any direction while falling past them. The same timed-landing trick applies to these rails: jab the thumbstick just as you’re about to touch the rail and you’ll score a perfect grind, a speed boost and a pretty green trail. Releasing the thumbstick launches you back off the rail, either into another trick or to avoid an obstacle. Things likes staircases and piles of TNT will promptly murder your skater, forcing you to restart the level from the beginning. 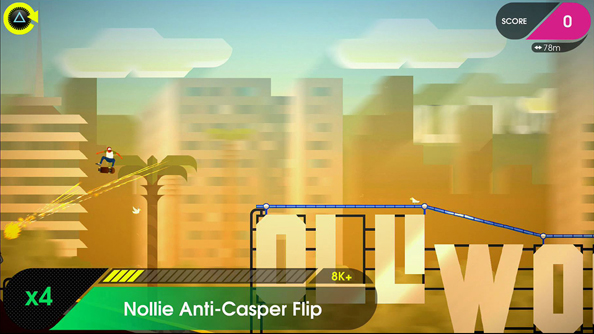 As levels progress the game presents challenges for players at different skill levels. Treat OlliOlli 2 as a platformer and you can simply aim to reach the level’s end using only the safest and most unadventurous skateboarding techniques. Once more confident you can tackle some of the level’s individual challenges, things like collecting items, completing a run with only perfect landings or hitting a high score.

There’s a level of mastery available to those who can manage it, and a happy middle ground of fun mediocrity for those who can’t. OlliOlli2 introduces manuals that allow you to string a combo together pretty much forever. Land in the just right way and you can carry your score multiplier to the next jump or grind rail, amassing a giant sack of delicious points that can ultimately be squandered by ending your combo with one sloppy landing. 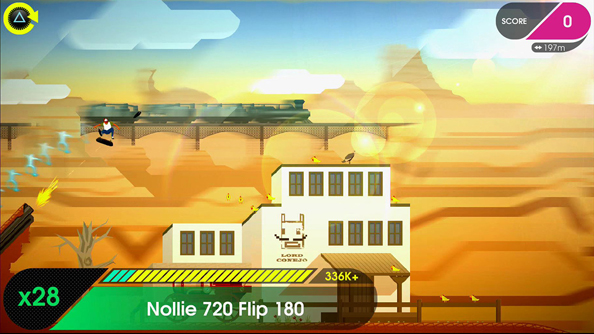 That’s perhaps not as harsh a risk/reward balance as it might sound. Levels are short enough that you won’t ever find yourself playing conservatively with your combos, instead you’ll string them out with the brazen confidence of a person intent on comboing victoriously all the way to the final rail. You’ll go hard, and most of the time you’ll go home, but on the one occasion you go hard and don’t go home, you’ll feel like the king or queen of all the skateboards.

OlliOlli 2 has a disgustingly cruel difficulty spike. Its controls are unique and must be fully digested by the brain over many hours of play, taking a least two nights’ sleep and several OlliOlli 2 dreams before the fundamentals really start to sink in. 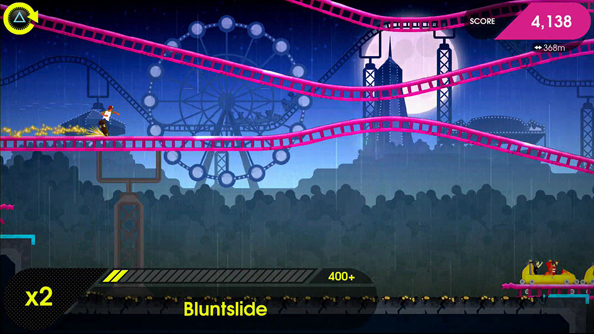 You’ll find yourself surprised by your sudden graduation from conservative kickflips to 560 nose-jab ollie-toe-things, as you retrain your brain and fingers to jaggle the thumbstick in new and exciting ways with each jump, becoming increasingly confident in your timings and landings. But you’ll find inordinately difficult challenges once levels start requiring that you slow down, that you come off rails early in order to set up for the next jump, and that you memorise the track design with repeated failures.

Outside of the trickier levels, OlliOlli 2 has a hypnotic flow that’s encouraged by some clear art design, its subtly highlighted dangers and luminous rails, its flashes of greens and pinks to reward perfect timing. Even average players will find a sort of zen-like meditative joy in how the thing plays, how the skateboard goes, how your brain and fingers form a close and intimate friendship that you’re somehow not allowed to be a part of.

Daily Challenges and split-screen multiplayer and pro-versions of tracks and a really cool soundtrack are all other things that OlliOlli 2 has going for it. It’s an improvement on the scrappier feeling original, introducing that one tiny combo-blending manual trick that transforms the game into a profoundly new-feeling and lovely thing.