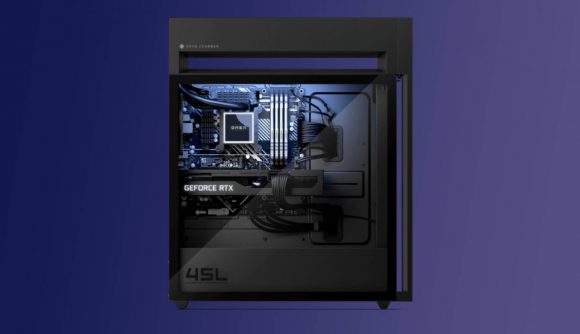 The best AIO coolers can help boost fps and keep your gaming PC ice cold, but installation can be a bit of a faff. Thankfully, HP’s new Omen 45L PC case features a dedicated Cryo Chamber that makes cooling your components more of a convenience.

Sure, HP’s PC vision isn’t half as intriguing as CyberpowerPC’s Kinetic case, but its patented Omen Cryo Chamber could make all the difference. In fact, HP claims putting space between the case’s CPU and AIO liquid cooler can make 6°C of a difference.

Of course, the Omen 45L also serves a more mundane purpose, as HP says it also doubles up as a handle. If you’re a fan of the Nintendo Gamecube, you’ll likely think this is a unique selling point. However, hulking around a full PC is going to be more strenuous than carrying a dinky purple console, so if you’re looking for a way to bring your desktop experience from room to room, you might want to hold out for Dell’s Concept Nyx gaming hub.

The HP Omen 45L is available as both a complete desktop package and a DIY chassis should be available soon, so you won’t need to replace your entire setup. The preassembled rig boasts either an Nvidia RTX 3090 GPU or an AMD Radeon RX 6700 XT, alongside either an Intel Core i9-12900K or AMD Ryzen 9 5900X CPU. While prices start at $1,899.99 USD for the full shebang, the empty shell hasn’t got a price point as of yet.