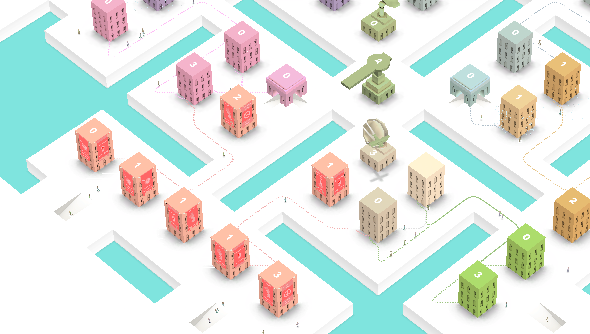 One Minute to Midnight puts you in charge of your own revolution and has you watch as your movement turns sour.

It’s a free Unity game and it’s a great way to while away an hour.

The premise is that, fed up with the current government that panders to the rich and exploits the poor, you’ve started a revolution of occupation. You take tower blocks around the city which then attract more supporters and, with that bolstered support, take more tower blocks till the whole district is under your control.

You’re not the only revolutionary and to make sure your group prevails you must take over the tower blocks owned by other factions. You need only move a larger group of supporters into the building than is currently holding it for it to become yours.

Multiple factions operate in cities in later levels, making for chaos on the streets as bands of rival supporters move from block to block taking new territory in one place and losing it in another.

Later levels see special buildings like airports and subways introduced, Each lets you spread your word further and faster when under your control. But, if your rivals get there first then it can severely hinder your efforts.

Underpinning this all is a story of your rise to power and the sacrifices you make along the way. I won’t spoil it, as One Minute to Midnight is definitely worth a play through.