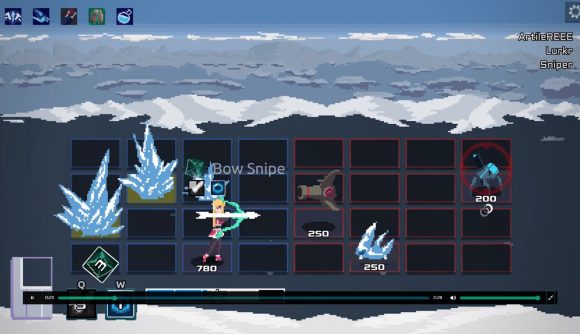 A big part of the appeal of deck-building games is how they get you to manage probability – while you get to pick the cards you have available, you don’t get to control the order in which they appear, and that tension is where improvisation becomes important. It’s definitely an important element in One Step From Eden, a new roguelike deck-builder currently on Kickstarter.

While One Step From Eden is a deck-building game, it is not a turn-based game – instead, you’ve got to flit around your side of the gameboard, targeting enemies across from you with a variety of spells and abilities drawn from your Slay The Spire-style deck, which you build up over the course of a run. Enemies’ attacks are telegraphed onto your side of the gameboard, and you’ll have to manage dodging those while you attempt to target them with your own attacks, which come in the form of ice blasts, lightning, bombs, and more.

Slay the Spire is a big influence on One Step From Eden, but it’s also a clear homage to Mega Man Battle Network, with its grid-based real-time combat.

Cards each have a mana cost associated with them, but you only get two or three cards at a time. You can cast them as fast as your mana allows, and move at the same time. The effect is frantic, fast-paced battles that feel a lot like Crypt of the Necrodancer in terms of pacing – your moves become a kind of dance, and returning attacks to catch tricky enemies is extremely satisfying.

Have a look at the Kickstarter trailer:


One Step From Eden is a game by Thomas Moon Kang, and the Kickstarter launched January 3, quickly hitting its initial $15,000 target. He’s got a few stretch goals lined up though, such as pet summons at $20,000 and bonus soundtracks at $40,000. Kicking in $15 will get you a copy of the game when it launches in October this year, but you can also find a link to a free demo to try out if you’re just curious.