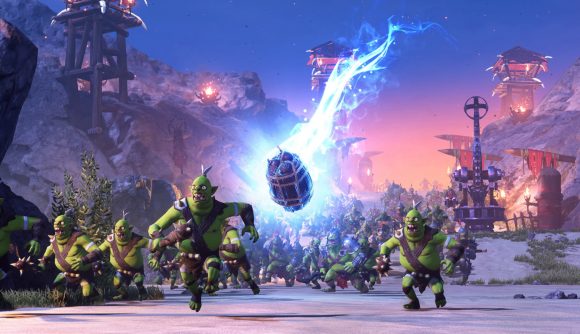 One of the big early Stadia promises was that without the need for dedicated hardware, you’d be able to stream games at higher visual fidelity than you could manage at home. Results on that front have been mixed, but the upcoming timed exclusive Orcs Must Die 3 is set to post the numbers you’d hope for – 4K and 60fps – though there’s some wiggle room.

“Our game renders at 4K and 60 frames per second,” lead designer Jerome Jone tells us. The game will make use of “upscaling techniques and dynamic resolution to keep the frame rates smooth when there are complex situations. Those situations can range from different things. Rendering at 4K and 60 frames has always been the goal.”

Dynamic resolution has been used pretty extensively in modern console games, and it’s occasionally featured as an option on PC, as well. It lets resolution drop to lower numbers when your GPU is under a heavy load to help keep the frame rate smooth. That lower-quality image is then upscaled back to your chosen resolution to help keep the drop from being noticeable.

Drops in resolution and performance for Orcs Must Die 3 are going to come primarily when you’re pushing the game to its limits.”Part of the beauty of Orcs Must Die is that players can create really unusual trap layouts,” Jones says. “You can create crazy mousetraps, and you can play endless mode to wave 60. In order for wave 60 to be harder than wave 59 sometimes there’s more units. They move faster. So that can stress some things.

“Should those kind of things happen, we do allow the frame rate to drop a little bit in those cases, but we don’t want to limit the creativity of those players.”

Jones also gave us the lowdown of Orcs Must Die 3’s massive War Scenarios. You can expect our full interview to go live soon, and we’ve got plenty of upcoming PC games for you to check out in the meantime.