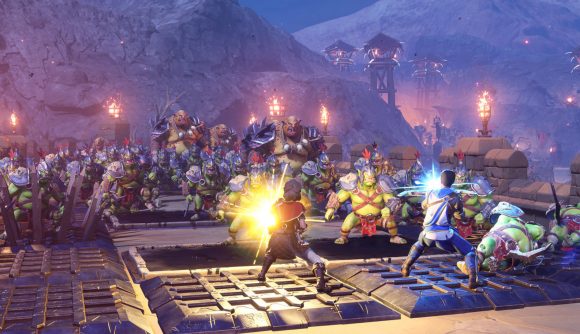 Orcs Must Die 3 is on the way, and it’ll follow up directly on the blend of action and tower defence that made the first two titles early hits in the field of indie games. Robot Entertainment plans to give fans more of what they enjoyed from the originals, but there’s one big addition: War Scenarios. These giant stages feature massive numbers of orcs, and function basically as boss fights within the campaign.

“We were calling them boss scenarios within the company,” lead designer Jerome Jones tells us. “Not really because they have a boss in them, but because they’re sort of milestones, and they create these cool peaks in the campaign.” War Scenarios will feature massive open battlefields, alongside more constrained areas to defend within your fortress’s gate.

“You have to naturally build outside on the battlefield,” Jones says, “and the entire battlefield is trappable. You have much bigger traps, they take up a bigger space, and they kill much bigger groups of units. But as they start to threaten your gate, you have to make that transition of ‘Okay, I need to start putting traps inside the fortress now because I’m going to lose the gate.'”

Think Helm’s Deep: “It’s very much like a Lord of the Rings-style fight where you’re defending the gate and the outside as long as you can. (There’s some players that are so good they never lose the gate, but these are the hardcore guys at our company that are just ridiculous.) You get that feeling of falling back and having to relinquish the gate and start putting your traps inside, and defending the rift from a different perspective, as the waves progress during a War Scenario.”

Orcs Must Die 3 is scheduled to launch this summer as a timed Stadia exclusive. We’ll have much more from our interview with Jones soon.