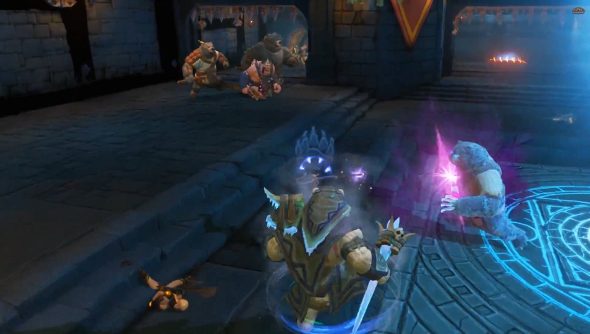 A big update is coming to the Orcs Must Die! Unchained closed beta tomorrow, introducing a bunch of new stuff including a new playable character, big polar bear fella known as Tundra. He wears a lot of fur, which seems a bit unnecessary. I mean, he’s probably not bothered by the cold. Maybe it’s for modesty’s sake? Nobody wants to see a polar bear’s crotch in the middle of a battle, I guess.

On top of the hairy new combatant, who can ignore crowd control effects and dishes out both ranged and melee damage, twenty new trap cards and some new items are also being tossed into the orc-slaying siege game.

With all this extra utility and options being given to heroes, it’s only fair that the minions get their fair share of upgrades too. This parity comes in the form of minion captains. These tougher-than-normal monsters join waves when they hit higher levels. Captains don’t attack enemies, only gates, but if they manage to survive and jump through the rift, they are worth two rift points.

These special minions could help out your opponents too, however. Killing a captain nets a tidy amount of resources, letting a team catch up if they are behind. So there’s a bit of risk involved in levelling up.

Orcs Must Die! Unchained’s getting Twitch integration too, because what’s the point in winning a match unless other people can watch you?

It’s a chunky update, but you can see the patch notes here.

You can sign up for the closed beta, or buy into it by becoming a founder over here. It’s going to be free-to-play, though, so you might want to save your money.

Our Jules has this to say about it, in his Orcs Must Die! Unchained preview: “It’s a glorious, ridiculous melee: best played with friends.”