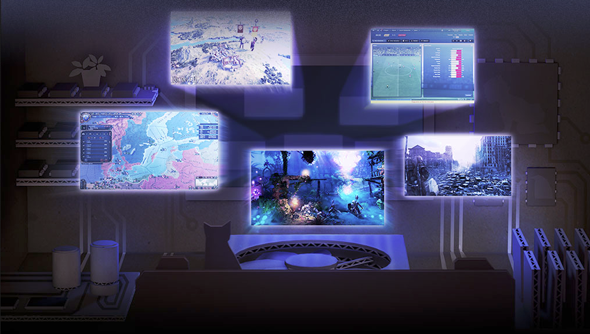 Tomorrow, Valve will begin shipping prototype Steam Machines and Steam Controllers straight from the factory to beta participants. As exciting as that is, they’re all in America, there’s only 300 of them, and they’re probably not you.

The real news, then, is that tomorrow is also the day SteamOS becomes available for download, for free, to absolutely everyone.

The operating system will be opened up to individual users and commercial manufacturers at the same time tomorrow. Valve suggest waiting until partway through 2014 to try it out, “unless you’re an intrepid Linux hacker already” – but supposing you are, there’s nothing stopping you from getting a head start with their living room OS.

In-home streaming won’t be included, sadly – that’ll be the subject of a separate beta in the near future.

At 2pm PST today, 300 Americans will learn that the OS and accompanying hardware is winging its way to them, along with a number of SteamOS-native games.

I’ll leave a pause here for a wistful sigh.

Valve had originally hoped for an international beta, but were forced to rethink their plans thanks to “regulatory hurdles”.

“It means we can’t collect beta feedback from Steam customers world-wide, which is pretty unfortunate,” they wrote. “All things considered, we’re sure it was the right decision, because the alternative was to delay the whole beta beyond the point when we’d be able to incorporate any feedback into the 2014 products.”

The commercial Steam Machines on sale in 2014 won’t be affected by any such restrictions, and Valve will make more announcements regarding them at CES on January 6. Or as the trade event is rapidly seeing the date rechristened, ‘Second Christmas’.

How long are you willing to wait for a lounge PC? A handful of months? Forever?