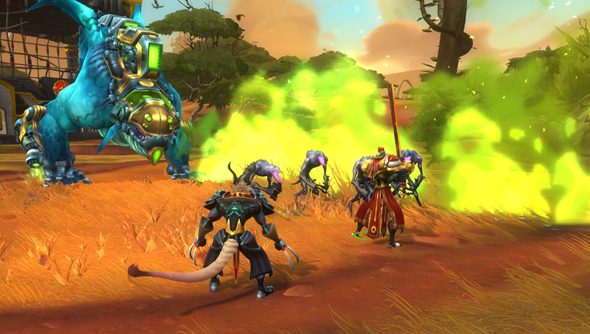 Reading. The thankless act of staring for minutes on end at thousands of jagged, dark marks on glaring white, before feeding them through your memory in the hope of finding a match.

It’s exhausting. So why not nip over to the PCGamesN Twitch channel this morning, where Nick’s Yorkshire lilt will slide effortlessly into your ear like a wet willy? He’s playing Wildstar – the really very good MMO which offers WoW-like thrills but “doesn’t hang around”.

In an alarmingly short space of time, it seems everybody who likes MMOs has become Nick’s friend.

We’re planning to stream his progress all day, bar a break for lunch at 1pm this afternoon.

His plan is to level all six of Wildstar’s classes to 15 over Christmas – starting with the Esper, a psionic blade-wielding ranged caster. Next on the agenda is PvP, just as soon as Nick hits level 10. Knowing his way with an RPG levelling system, that likely won’t be long off.

I asked him to name a highlight so far, and he mentioned a “Hookah creature smoking something fishy”. I don’t know what that means. I do know that Carbine’s staff have been dipping in and out of chat as he’s been playing, answering questions, which is nice.

If you’ve any, more permanent comments you’d like to make on Nick’s progress, by all means make them here. Also: what would you like us to stream next? We’ve most recently been weighing up Starbound for multiplayer sandbox shenanigans.