In 1999 I did not play Outcast. Nor did I play it in 2000, or any of the other years after that. I remained oblivious to its existence until a few months ago when original developers Appeal announced that they were remaking the game under the name Outcast: Second Contact. So before checking it out at Gamescom 2016, I thought it was best to investigate the cult classic.

Looking for something fully up-to-date? Check out the best PC games of 2016.

Time has not been kind to 3D games of the ‘90s, and Outcast is no exception. Coming to the original fresh almost twenty years late, it’s not hard to be instantly put off by its clumsy mechanics and muddy, smeared world. It’s hideous, it’s impossible to play… and it’s easy to see why it has an adoring fan base. Back in 1999, that open world must have been mind-blowing.

Outcast is a cult classic in the most traditional of ways. It’s not a widely-loved game that’s a bit niche; it genuinely is only loved by a small faction of gamers who recall its impact. As such, a previous attempt to bring the game back fell flat on its face. The 2014 Kickstarter never even made it to the half-funded point of its $600,000 ask. Appeal were undeterred though, and so raised the money themselves through the sale of an Outcast re-release.

And now we have Outcast: Second Contact, a complete remake that feels very much made for the fans. And that may be both its best feature and demise. 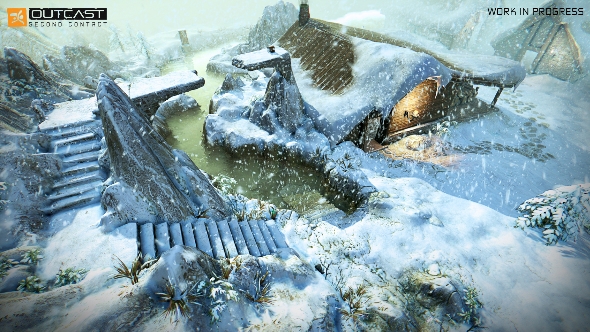 While Second Contact looks astonishing compared to its parent game, by modern standards it still seems rather clunky. Character animations are stiff, the dialogue is archaic (they’ve opted to remaster the original voice acting rather than re-record), and the systems feel a bit old hat. The former two factors can be entirely forgiven, but it’s that last one that really hurts Outcast. In 1999 its seamless, non-linear open world was revolutionary. Now they’re available in bulk-buy quantities. For modern audiences, there’s not a huge amount that makes Outcast special.

That’s not to say that Outcast’s word isn’t interesting. It does a very good job of simulating society through the use of reactive AI, as opposed to the scripting that many open-world games opt for. The exotic planet’s citizens will mill around doing day-to-day tasks, be that toiling in the fields or patrolling zones with rifle in hand. Interrupt their day and they act appropriately; farmers flee from combat, soldiers run towards it. Disrupt the system dramatically and there’s widespread impact; trashing the taxation system, for example, can make things better for the population.

Appeal put emphasis on the blend of action and adventure. They’ve created a game where you can approach situations in numerous different ways, be that talking to every single NPC to progress through dialogue and discovery, or by opening fire on the first thing you see move. With very little scripting the world is designed to be alive and reactive to your choices, and you can see why this blew minds in 1999. It’s still a nice idea in 2016, but as I watched the developers demo Outcast at Gamescom, I couldn’t help but feel a bit underwhelmed. 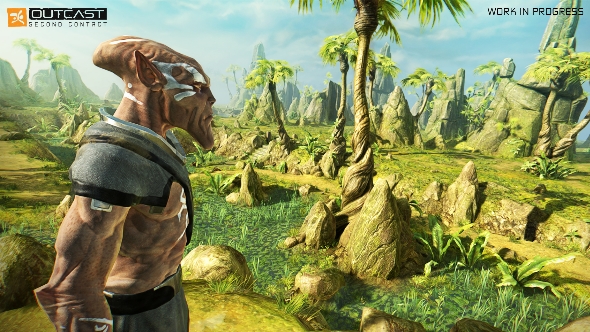 For example, after a sluggish shootout the devs had player-character Cutter Slade crouch in some tall grass. The enemies, confused by his disappearance, began to hunt for him. A groundbreaking system at the turn of the century, but far too commonplace seventeen years later for it to be considered a back-of-the-box feature. Combined with menus that felt dragged from that period too, Outcast didn’t convince me it was successfully reinventing itself for modern audiences.

We’re living in a period where games with old-school values are making a real comeback. RPGs like Tyranny and Divinity: Original Sin emulate the great freedoms of ‘90s adventures but add a modern sheen and fresh ideas. Outcast should be like these games, but instead it feels like a HD remaster from six years ago. It’s an old game in new clothing (albeit new threads bought from an end-of-season sale).

Don’t write it off, though. If you’ve never heard of Outcast before and a reactive open world filled with living AI characters sounds just the ticket, then perhaps you’ll be charmed by it. But I believe the only audience for Outcast are the original fans; those people who want to see the game exactly how they remember it. Sure, there’s a bit of new content and the controls have been re-mapped so they make sense, but this is 1999 all over again. Many remakes have promised a faithful return to the original and failed, but I get the impression that won’t be the case here. And that’s probably a very good thing for it’s small-but-adoring legion of followers. Less so for sales targets.