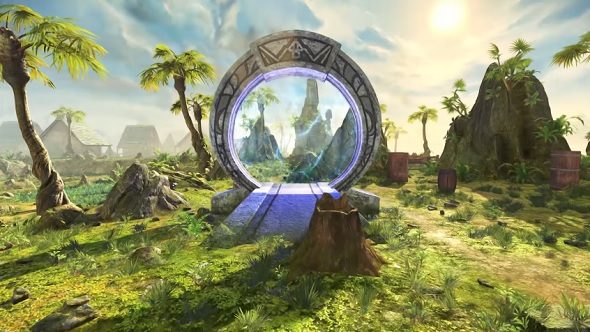 Originally scheduled to come out in March, Bigben Games have announced that Outcast – Second Contact will now be releasing in the autumn of this year. While not stating an exact reason for the delay, Bigben Games have released a trailer as compensation, showing the current state of this remake.

If you’re looking for more things to blow up, have a gander at these PC shooters.

For those who didn’t play the original Outcast back in 1999, it was a critically acclaimed action adventure game which followed the adventures of US Navy Seal Cutter Slade. With a black hole threatening to engulf the Earth, Slade and a handful of scientists are sent to the alien world of Adelpha to try and stop this cosmic catastrophe.

While trying to close the anomaly, Slade gets mistaken for a legendary hero by the local population and must juggle saving both humanity and the natives from destruction. What results is an adventure which sees players blasting aliens with a variety of fantastical weaponry, travelling to the different themed areas of Adelpha using what are basically stargates and occasionally doing some light platforming.

Getting top marks across the board from sites back in 1999, only time will tell if Outcast – Second Contact will curry as much favour with contemporary critics. Outcast was praised for being ahead of its time, so I wonder what years of third person shooters and open world games will have done to opinion of this ‘90s gem. The graphics certainly haven’t entranced new fans, if the comments on the debut trailer are anything to go by.

You can still play the original Outcast on Steam and GOG if you want to play like it’s 1999 but if not, Outcast – Second Contact is set to release sometime in autumn.