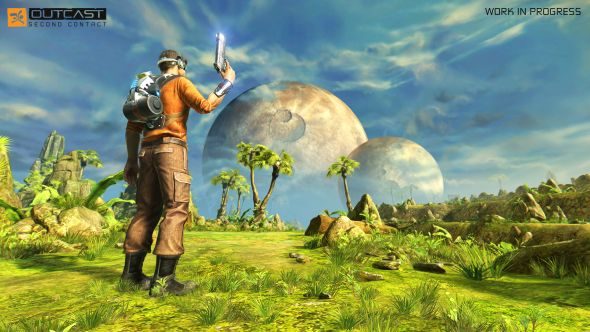 Phwoar, get a load of those aliens. This is Outlast – Second Contact, the lastest in line for a HD remake, though this is clearly more than a simple up-rez. The original, an adventure game released in 1999 to a bit of praise and growing fandom over the years as highly ambitious and gorgeous, but massively flawed and buggy. The VTMB of its time, only in space. Now it’s back, due for a proper reveal at Gamescom.

Another for the upcoming PC games pile. It grows every day.

It stars Cutter Slade (not bad as 90s videogame protagonist names go) on the planet of Adelpha (bit worse) “in an attempt to pierce its secrets in order to prevent a terrible catastrophe.” Said catastrophe is a rupture in space-time created by a destroyed probe that will, obviously, blow up the Earth if left unchecked.

Developers Bigben and Appeal Studio, working in tandem, aren’t resting on the original’s designs. As well as the massive increase in graphical quality, they promise we’ll “uncover many things that will even surprise fans of the original.”

The game failed a Kickstarter a few years ago as Outcast HD, but it looks like the funding was found and now it’s ready to go. Slade, and his friendly group of probably soon-dead scientists, will be with us in March 2017, as well as releasing on the PS4 and Xbox One. Specifics will arrive during a Gamescom presentation next week. Here’s a trailer for the original, if you never saw it, and you can see the rest of the screenshots over on NeoGAF.