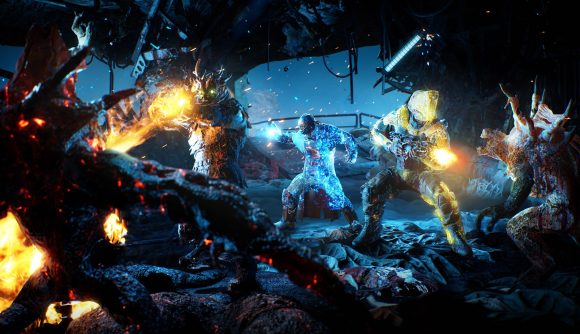 Sci-fi co-op game Outriders may have run into some snags during its debut, but that hasn’t kept it from being a hit. Square Enix says Outriders was played by more than 3.5 million unique players during its first month, with about 31 hours average playtime. It was Square Enix’s biggest Steam launch ever, and that’s not counting the players who picked it up on the Epic Games Store.

“Launching a new game IP is never easy and we remain very grateful for the community’s support and feedback,” said Jon Brooke, co-head of studio at Square Enix External Studios. “We continue to listen carefully and want to assure everyone that we are committed to improving and enhancing the experience in the coming weeks and months.”

Brooke hinted at new content in the works for the sci-fi game. “We also look forward to expanding on Outriders in the future,” he said, without going into any specifics. For the past weeks, People Can Fly has been busy working on several crucial bug fixes, as well as on the restoration process for lost legendary gear, which finally got underway at the beginning of May. Another patch is tentatively planned for May 20, which will address a damage mitigation issue as well as some remaining crashes.

The studio has, however, also been collecting some fun stats on what players have been doing in Outriders, which it shared on Twitter. Folks have played a total of 120 million hours of Outriders, for example, and done 1.6 quadrillion points of total damage.

We’re excited to reveal that we surpassed 3.5 million unique players in our first month after launch!

Further stats in this thread 👇 pic.twitter.com/rCyo3wL2fw

The Trickster is the most popular class, representing 27.9% of players. That’s followed by the Pyromancer at 26.3%, and the Technomancer at 23.9%. Least popular is the chonky Devastator, which has attracted just 21.9% of players.

We’ve got a guide to Outriders’ endgame expeditions if you’ve wrapped up the campaign and are wondering what to do next – at least, while you wait for whatever’s in store for Outriders in the future.