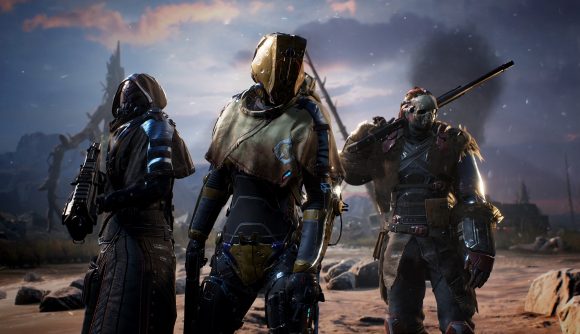 Outriders developer People Can Fly has worked on oodles of iconic games. The Polish developer created Gears of War: Judgment, and it worked on Fortnite after Epic Games subsumed the developer in 2013. It has made some fan favourites, too, releasing first-person shooter Bulletstorm in 2011. However, one of the biggest influences on its upcoming sci-fi shooter Outriders – the first title the developer is releasing since it split from Epic Games in 2015- is Diablo.

“Diablo started a new genre with [its] loot,” game director Bartosz Kmita explains. “We’ve always loved these things in RPG games. I know it’s become popular with shooters, but we’ve had this idea for many years now.

“Overall, we like the darker tones – mostly with Diablo 1. We don’t like clean, science-fictionalised shiny armour, so we tried to take inspiration from those brutal worlds of dust and loot. Of course, there are gear and powers, too.”

From our Outriders impressions, we can certainly see what Kmita is talking about. Once you get through the opening, you’re given the option of three Outriders classes that fulfil different archetypes and come with unique abilities. The Trickster, to name one, can teleport behind enemies – giving us our assassin archetype.

There are other Diablo staples, too. Outriders world is drenched in a dark and grimy colour palette that highlights the world’s infestation. Hung corpses are a common sight, and buildings have undergone years of rot and decay.

As you dart from gunfight to gunfight, you’ll also pick up new bits of gear that change your appearance. From what we’ve played, armour never turns clean or flashy and stays true to the post-apocalyptic garb you’re introduced to early on. Think Mad Max-style outfits of rundown armour and cloth.

While People Can Fly is trying to take itself in a new direction with Outriders, the developer still believes there are some things that will feel familiar. “It’s not hard to notice that we have covers and we worked on Gears of War,” says Kmita. “We’re going with a darker tone with the story, but we have dark humour like in Bulletstorm. It’s hard to escape from your work, so people will find things here or there.”

If this sounds like your kind of thing, then you won’t have too long to wait until you can give People Can Fly’s new game a try. While the Outriders release date is delayed, you’ll still get to play it before the year ends. If you want something to tide you over, our list of the best FPS games on PC should do just that. You never know, Outriders could be joining that list come the end of the year.