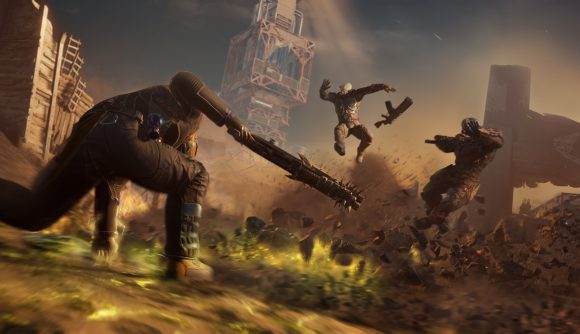 After last month’s round of buffs to all of Outriders’ classes, a new patch that’s out today has focused on some outstanding issues with the co-op game’s Devastator specifically. The latest update addresses issues with the Devastator’s impale skill and its ability to dodge reliably when certain mods are equipped.

The new patch corrects the behaviour of the Devastator’s impale ability, so that enemies that have been killed by it will register as being dead before they despawn. Another Devastator ability, reflect bullets, should now provide protection from Sciathan projectiles – these are the flying pterodactyl-type creatures that can manipulate electrical currents when they’re aggravated. Another bug that’s been addressed in this patch is one that cropped up when Devastators tried to dodge while using the Auto Reflect mod. That’s corrected now, so tanky players won’t have to take quite as many extraneous shots to the face anymore.

People Can Fly also says it’s fixed a bug that prevented the Technomancer’s Plague Sower set bonuses from activating correctly, and it’s addressed an issue that was causing the Pyromancer’s phoenix nesling passive to restore 100% of health, rather than the intended 50%, during multiplayer.

Outriders should perform better in some specific troublesome situations now, too. An issue that was causing stuttering in the drained lake during the third enemy encounter in the Scorched Lands expedition has been addressed, and fights with crawlers during expeditions shouldn’t cause stuttering anymore either.

As of this patch, matchmaking should no longer default to ‘open’ after you’ve set it to ‘closed’ – that setting will stay put, which People Can Fly hopes will cut down on matchmaking with unsuspecting AFK players.

Steam has the full patch notes if you’d like to see all the changes in the latest update, which weighs in around 4.5GB.