This is the second time Outriders developer People Can Fly has gone by that name. The Poland-based outfit first used it when it developed humour-laden shoot ‘em up Bulletstorm and Gears of War: Judgement. Following some time under the Epic Games banner as Epic Games Poland, it also worked on Fortnite, before becoming independent once more. The studio’s return to its old moniker befits its return to its roots with comeback shooter Outriders.

It’s a transition you meet early in-game, too, as a foreign planet turns into an apocalyptic badland reminiscent of Bulletstorm and Gears of War: Judgement. After booting up the game I touch down on a vibrantly green planet called Enoch. It’s quickly apparent that something has gone wrong on Earth, but before I learn what, a black, sludgy substance attacks me and my convoy of Outriders. One swift defeat later and I’m left in a cryo pod for a lengthy nap. I emerge 31 years later with newfound superpowers to find that Enoch is now a lifeless, lawless land littered with corpses. Some even hang from the trees. What were once thriving fields of greenery have become desolate wastelands of dirt and grey, just three decades after humans have discovered it. Makes you think.

That’s the premise, and while the rest of the story has yet to reveal itself, the question of who is in the wrong here is clearly one that People Can Fly wants to ask. Before I can come to grips with what I am becoming, a bandit slings me into the back of a truck. He berates the Outriders for what they’ve done, whereupon another captive prisoner leaps to my defence, and is shot for his trouble.

Outriders’ jarring opening is an interesting gambit from People Can Fly, but it could pay off. Speaking to more people reveals that The Anomaly is to blame, but I’m oblivious to what that actually is. It sets the stage for a potential exploration of environmentalism. Global Warming’s hold on the world is among our greatest fears in the modern-day, but politicians would rather deny its existence. Plenty of shooters are happy to let me blow things up while I rummage for loot, but I’m rarely asked what the effect of that is. If Outriders turns my oblivious nature against me, I’d be all in for the rest of the story.

The bleak visuals may put you in mind of Gears of War right away, but it only clicked for me when I picked up a gun. Moment-to-moment gameplay involves darting from cover to cover as you dispatch rogue bandits. Guns feel weighty to shoot and appear worn, attuning Outriders with the Mad Max-style post-apocalyptic vibe that Enoch has got going on. Enemies aren’t quick to die, and will take a bit of whittling down regardless of the gun you have equipped.

Diablo is another clear influence, made explicit when one of the developers mentioned their fondness for Diablo’s loot and grim world, but noticeable in the game’s ability system, too. After you finish the prologue, you’re given the option of three Outriders classes: Trickster, Pyromancer, and Devastator. Each of these roles fulfils different archetypes. The Devastator’s abilities allow you to tank damage, while the Pyromancer is more mage-like and can set foes ablaze.

The stand-out is the assassin-inspired Trickster, due to the synergy between its abilities. Once you unlock your first three moves, you can teleport behind bandits and put up an area-of-effect ability around them to slow them down. Not only does this leave them open to your team, but you can hit them with your melee to finish them off. 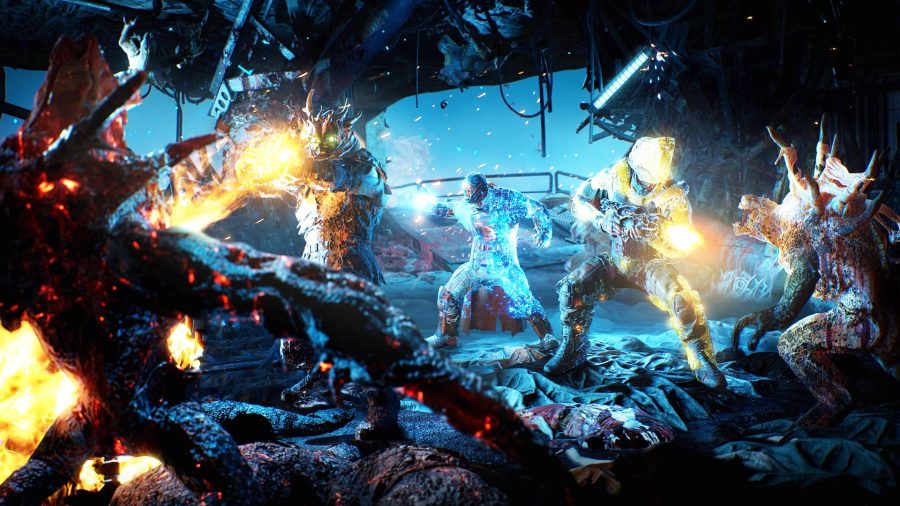 There’s a touch of Diablo’s loot system, too. As you stumble through Enoch you find better gear by looting bandits or bartering with local vendors. Your growing power level is reflected in your appearance, as you become more impressively armoured. Unlike Destiny, however, you’ll maintain your rusted Mad Max-style vibe, as opposed to looking like space royalty.

The various side-quests you’ll stumble upon during your stint in Enoch also provide rewards, such as new guns. One optional mission I undertake has me take down a local warlord who is causing trouble. My reward is a rusted hunting rifle that proves particularly useful in dealing with other bosses.

I was tempted to draw comparisons between Outriders and Destiny at first, but it’s merely aesthetic. Sure, there’s looting, shooting, and space, but that’s it. Outriders’ skill trees, for instance, are fluid, and have a wealth of options you’d find in Diablo or Warhammer: Chaosbane, meaning you can tinker with builds in far more depth than you can Destiny’s fixed equivalents. 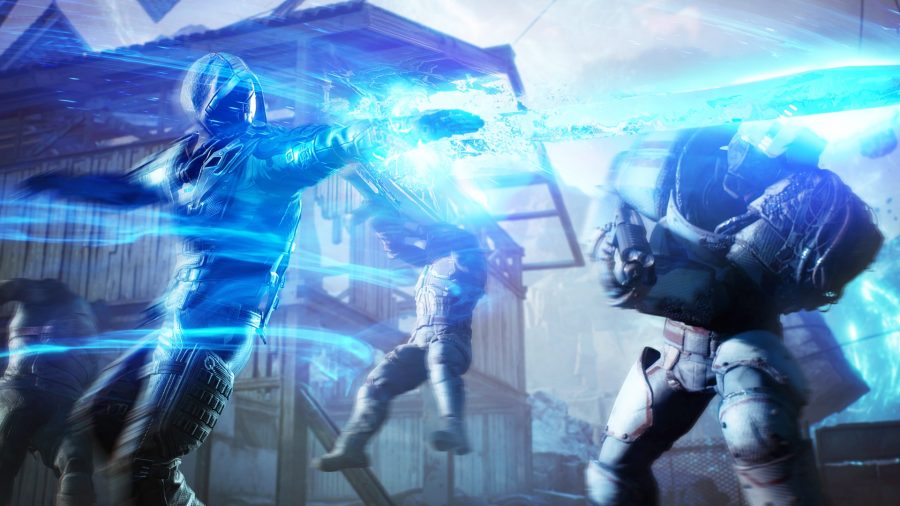 Outriders will also be a reasonably self-contained experience. While People Can Fly insists it doesn’t mind the games-as-a-service model, the developer wants a story that starts and ends. While Bungie has crafted an MMO-like experience that evolves over time, Outriders will come as it is – though People Can Fly hasn’t ruled out the possibility of DLC.

Loot this: the best FPS games on PC

There are plenty of ways Outriders can succeed, then, but plenty of ways it can fall short. Gunplay is tight, but that merely puts it on par with the Destinys and Divisions of the world. The class system boasts exciting combination possibilities, but just how flexible the skill trees are is yet to be seen. What excites me the most, though, is the possibility of a gripping and self-contained story that I can finish without having to buy more chapters.