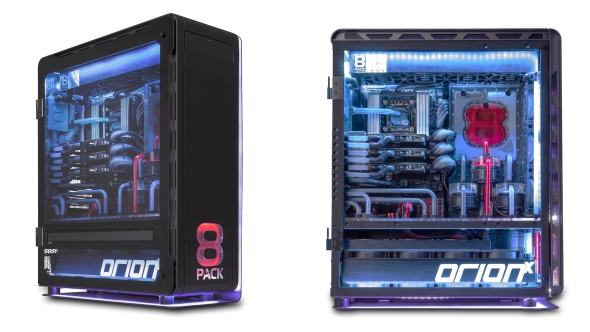 You might be a little fed up of talk about ‘an irresponsible level of power’ in these turbulent political times of ours, but when it’s about potentially the most powerful PC this side of Oak Ridge you surely want to pay attention. That’s how Overclockers have described their new OrionX machine, and it seems dead-on balls accurate to me.

Read more: the best gaming motherboards to build your next PC around.

The UK component floggers have today released the 8Pack OrionX, the conjoined twin machine they’ve flown around the world, showing it off at Computex and Gamescom last year and at CES this month. With Ian ‘8Pack’ Parry looking after it there was no danger of his OrionX getting Project Valerie’dout in Vegas.

And it’s now available to buy… if you have a spare £24,000 in your back pocket. The 8Pack OrionX is a machine which simply doesn’t know the meaning of parsimony, with its component list reading like the most fantastical, fanatical PC gaming wishlist you could imagine.

See what I mean?!

This thing’s got its own little Kuato PC lurking inside the Phanteks Enthoo Elite chassis so you can have the main 10-core supercomputer part of the rig beavering away on some project while you use its conjoined twin for a little light gaming. I say a little light gaming, but that mini-rig secreted inside still comes rocking its own GTX Titan X GPU.

But really, why would you want a dual-PC machine? “The idea for two systems in one came from the fact many business customers are using two systems in their working day,” Ian ‘8Pack’ Parry told us this week. “Usually one high power machine with multi-GPU for all the tough work, such as rendering, and then a less powerful box for basic tasks such as mail, web surfing, listening to music, media server, etc.

If they use the main machine for all this extra load it holds up their main job. Hence I came up with the idea of two 8Pack level machines in one Chassis to serve very high end customers both business and gaming who need a two exotic PC setup.”

So yeah, the short answer is: it’s not for you unless you’re Mr. Pixar himself, rendering away on Toy Story 33⅓ while being desperate to play Overwatch at the same time. Or a celebrity gamer with a hefty back balance and the yearning for the absolute best money can buy and hang the sense of it. 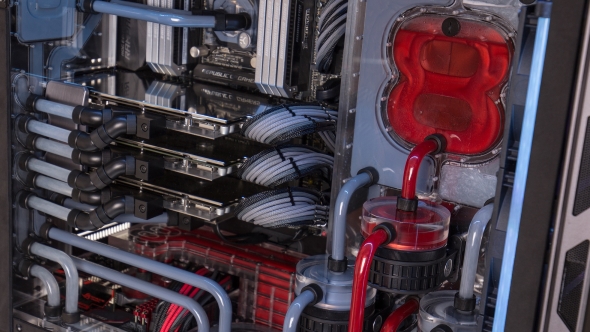 The cooling itself is a bit of a first too. Everything in there’s got its own section in the bespoke watercooling setup flowing around the monster PC, using pass-through plates of acrylic to push the liquid around the walls of the machine. It’s all been designed to ensure the different components don’t leak heat onto each other and remain as cool as possible.

8Pack wants you to surround the whole thing in 4K G-Sync monitors too. “Even the smaller system housing a single Titan X could game on such a monitor,” he says. “The main system can handle three of these monitors if the end user wants to use Nvidia surround.”

The OrionX is also hand-delivered in its own flight case, though these days they’re not dropped off and set up by 8Pack himself – Overclockers’ technicians will be there to get your £24,000 rig running for you.

They’re not messing around on the after-sales stuff either. If you ever wanted a pro-overclocker’s mobile number you’re in luck, you get 8Pack’s mobile number in your welcome pack. You also get a lifetime warranty, which also covers any labour upgrading the components down the line too. 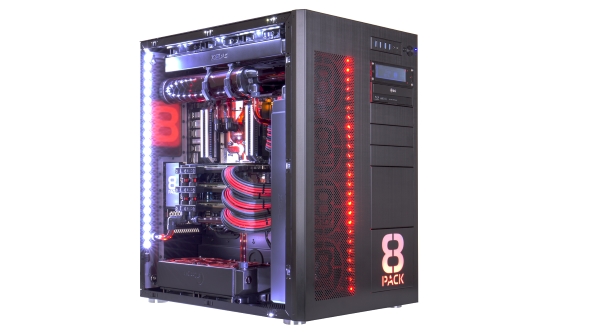 This isn’t the first ludicrously expensive machine Overclockers have released either. The previous holder of that record was the 8Pack Supernova, another deca-core machine with GTX Titan X cards in triplicate which is a relative snip at £13,700.

As a halo product the 8Pack OrionX is one hell of an advertisement for what Overclockers can do if they put their mind, and your money, to it. But jeez, five figures for a PC?