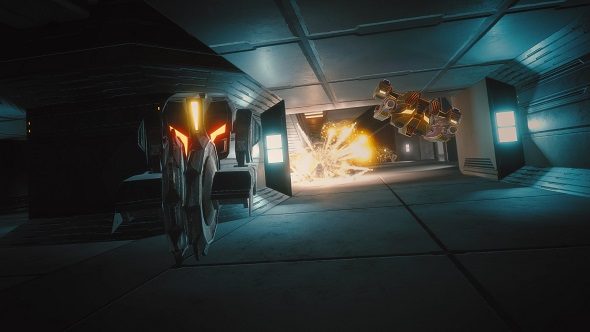 Ahead of a March 13 Steam Early Access launch, Revival Productions have released a new playable teaser for their fast paced shooter, Overload. Acting as a spiritual successor to PC classic Descent, this playable teaser shows off a sampling of a single-player level, alongside two Challenge Mode levels and the game’s training mode.

Instead of hitting the gun range, why not give these PC shooters a try?

Successfully Kickstarted back in March of last year and with a team made up of several of the original designers from Parallax, Overload is a ‘six degrees of freedom’ tunnel shooter where players have to fly through the winding passages of a massive machine in order to blow up a central reactor. While the core design philosophy of early six degree shooters has been kept for Overload, new layers of depth have been added on with hostages to rescue, traps to disarm, keys to collect and much more.

As players clear reactor after reactor, they will build up a mighty arsenal of weapons which can be swapped out and upgraded to face increasingly dangerous threats. There are 15+ levels in the main campaign, along with a special Challenge Mode for those who love getting to the top of the leaderboard. An extensive level editor is coming post launch, allowing players to create their own twisting reactor complexes for fellow pilots to navigate. While most of the game’s focus is on twitch shooting and aerobatics, there is a deep backstory and universe that is ripe for expansion, written by the writer behind FREESPACE 2.

Following the addition of its ‘in-cockpit’ view, Overload is now fully compatible with VR headsets and should (hopefully) not make you motion sick as you cut about reactor tunnels at subsonic speeds. The playable teaser is compatible with the Oculus DK2 but the full version should work with almost every headset on the market.

This playable teaser and the first release of Overload will be single-player only, but a special multiplayer expansion is planned for six to eight months after its Early Access launch. This was due to overwhelming fan demand during the Kickstarter and guarantees some super frantic multiplayer action for later this year.

You can download the playable teaser via Steam and it acts as a suitable appetizer ahead of Overload’s Steam Early Access launch on March 13.