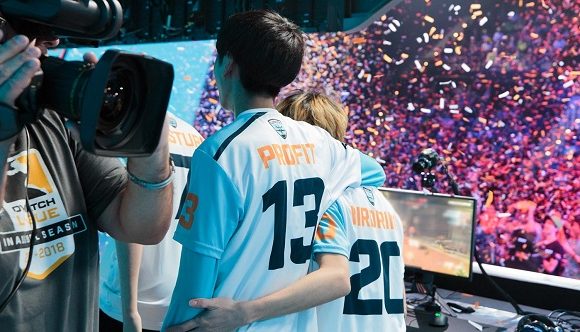 Well, this was unexpected. After a series of impressive wins in the Overwatch League semi-finals, Europe’s only pro Overwatch team, London Spitfire, is going through to the Grand Finals. This weekend’s victory over LA Valiant means the team will face-off against Philadelphia Fusion for a shot at the $1m prize pool. Could it really be coming home?

The result is excellent for the London squad, who have seldom looked like the best team in the league. The team scraped into the playoffs, with a relatively poor 4-6 final quarter that almost saw them edged out of the postseason competition.

In the past few weeks, the team have really found their feet, launching a massive comeback with a series of wins that has propelled them to the top of the ranks. In the first week of playoffs, Spitfire looked set to be knocked out, with a 0-3 defeat at the hands of Los Angeles Gladiators. When Spitfire returned for their next two matches, they looked like a different team. With a renewed hunger, the team pulled off a shock victory, scoring two perfect 3-0 wins over the Gladiators.

The west coast’s other team, Los Angeles Valiant, were perhaps understandably nervous stepping up to this weekend’s matches but few could have predicted the clean sweep Spitfire were about to produce. On Thursday morning, Spitfire took the lead with a 3-1 victory, thanks to an aggressive playstyle led by DPS player, Kim ‘birdring’ Ji-hyeok. In the second match, Spitfire dismantled Valiant, emerging with a 3-0 win, securing their spot in the Grand Finals.

“Based on the matches we’ve played so far, we showed really clean and decisive victories against our opponents,” Gesture says. “I don’t think we should be considered underdogs anymore.”

Elsewhere, Philadelphia Fusion and New York Excelsior did battle for a shot at the finals, with the Fusion boys coming out on top. Fusion followed up their 3-0 win on Thursday with a hard-fought 3-2 victory on Saturday. This was another upset, as Excelsior were favourites to take home the trophy.

“Going into today’s match, I don’t think any of us felt like we had something to lose,” Fusion DPS Josue ‘Eqo’ Corona said in a post-match interview. “After all, everyone was [picking] against us as if New York was going to win. We came in with the mentality that we just need to focus on our role as a team and what every player needs to do inside the game, and that helped us a lot.”

The first ever Overwatch League season will conclude this Saturday July 28th with the Grand Finals at New York’s Barclays Centre – you can tune in and watch the matches live on Overwatchleague.com, MLG.com, or on Twitch. Stateside, the matches will also be broadcast live on ESPN and Disney XD. The league’s inaugural winners will be decided by a best-of-three match between London Spitfire and Philadelphia Fusion, starting at 00:00 BST (Friday July 27th, 16:00 PDT) and returning at 21:00 (13:30 PDT). A third match will be played, if necessary, at 23:00.