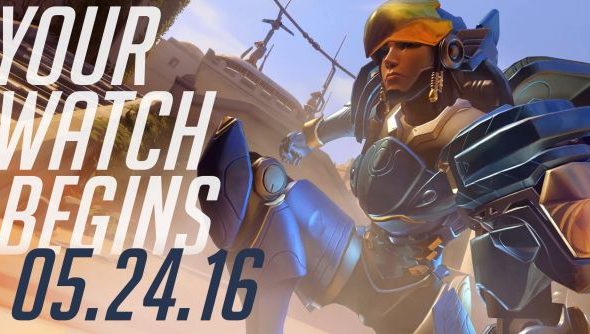 Update: Blizzard have confirmed the May 24th release date for Overwatch, as well as pre-orders giving access to a beta weekend. A separate, completely open beta will also run.

A little faster than expected, Blizzard have confirmed this morning’s leak of Overwatch’s release date and pre-order beta. However, they’ve also announced that a totally open, free to all beta will run from May 5th to 9th. It’s coming to both PC and the newest generation of consoles, and will feature everything that’s been shown – all 21 heroes, all the maps, the full progression system.

Will Overwatch land on our list of the best FPS games?

All this info in a new video with Jeff Kaplan:

So there’s a beta week running May 3rd through 9th, the first two days of which are exclusive to those who have pre-ordered. If you do pre-order, you get a separate access key for a friend to join you, as well as access for yourself. Then on the 5th, it opens up to everyone, presumably downloadable through the B.net client for anyone with an account. That’s the basics, with more info over on the official site.

As for the release date of May 24th, that’s also been confirmed, with a new trailer of its own:

Original Story:Whoops. An ad campaign on IGN, presumed to have been incorrectly set live too early, has revealed the planned Overwatch release date and that beta access will be given to all pre-orderers almost a month earlier. As seen above, May 24th is the launch date on PC, plus the newest consoles, while pre-ordering will get you access on May 3rd as part of the beta – likely to stress-test servers along with issue final balance fixes.

The post was spotted by Reddit user Deadpoolthegreat, who grabbed a pair of screenshots before the ads were taken down. Above is from the mobile version of IGN, while here’s what the desktop site takeover will look like: 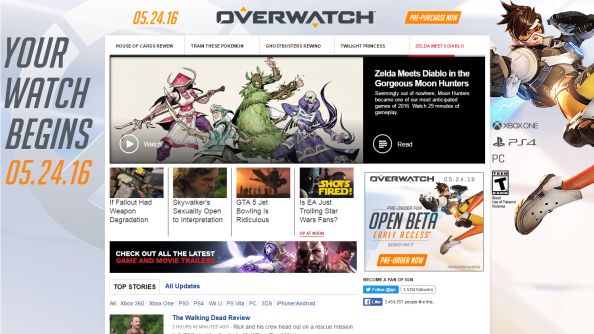 May 3rd is also the launch date for Battleborn, Gearbox’s similar-ish hero shooter, though that has a larger focus on single-player and more MOBA-like elements. The 24th, meanwhile, is when Mirror’s Edge: Catalyst is making its debut. Given Blizzard weren’t afraid to launch an SC2 expansion at the same time as Fallout 4 last year, chances are these are just the days that matched up best with their internal calendar, rather than paying much heed to what’s happening with the outside world.

Given these ads have clearly been sent out to the places that are going to run them, we’d expect Blizzard are preparing to give official word soon. There’s a big Hearthstone announcement this Friday they’re unlikely to want to overshadow, so either in the next couple of days or come early next week would be my bet. We’ve asked for comment, and will update if they get back to us.

In the meantime, if that’s whetted your appetite, pre-orders are up now for the Origins Edition of the game that comes with a few cosmetics and in-game goodies for Blizzard’s other titles.