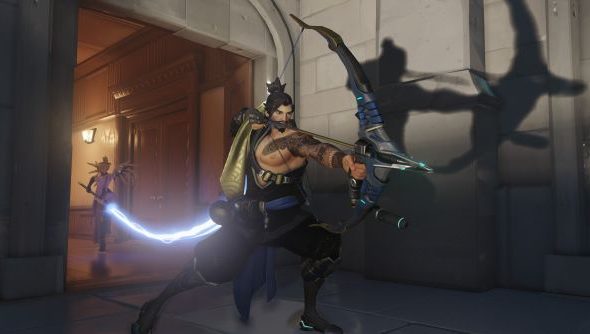 There was a moment, in the press conference immediately following Blizzard’s unveil of Overwatch, when Chris Metzen, Blizzard’s most public and high-profile exec, looked near close to tears. Overwatch is clearly a big deal for the company. Not just because of what the game is: a very fast paced first-person shooter. But also what it represents: a chance to salvage something good from the wreckage of their cancelled MMO, Titan.

Metzen tried to explain the backstory. “Titan,” he said, “was a pain in the ass.” A big sprawling MMO that was combining six different game ideas into one. Blizzard couldn’t make it work. It dented their self-confidence, their belief in their ability to create new worlds after the big successful one that came close to defining them. The team responsible for Titan was dispersed out into the rest of the company, turned to work on World of Warcraft, Heroes of the Storm, Diablo and Starcraft. A small core team remained.

Of all the things Titan was attempting, there was one portion that was fun, exciting. Great to work on. The game’s FPS multiplayer mode. Jeff Kaplan, now Overwatch’s game director had a solution.

“Why don’t we just make that?”

Within 18 months, the team had produced a spectacular, bright, inviting FPS. They nailed it.

It’s unfair to describe Overwatch as a clone of Team Fortress 2, but you can see the inspiration in the classes and game modes. It is an objective based game. The two modes they’re able to show far are capture points (cp_) and Payload (pl_) maps. Of the 12 classes in the game right now (Blizzard call them heroes), I can spot at least six that do the at least the same jobs. There’s an engineer, a dwarven Doctor Robotnic alike that builds turrets. There’s a heavy, but he’s a robot and he can convert himself into a stationary turret at will. There’s a soldier, but she’s an Egyptian super-soldier who can’t necessarily rocket jump, but she does have a special jump ability that does essentially the same job. There’s a scout, but her double jump is now a blink. There’s a medic and a sniper, but so far, there isn’t a spy, or a pyro, or a demoman.

But there is more.

Rather than weapons, each heroes utility comes from their abilities, MOBA style spells that are activated on cooldown. Our soldier, Farrah, has a rocket jump, but also a concussive blast that scatters groups of enemies. Our sniper can mark targets, but also reveal them through walls.

Those abilities both deepen the game, and raise the skill requirements. 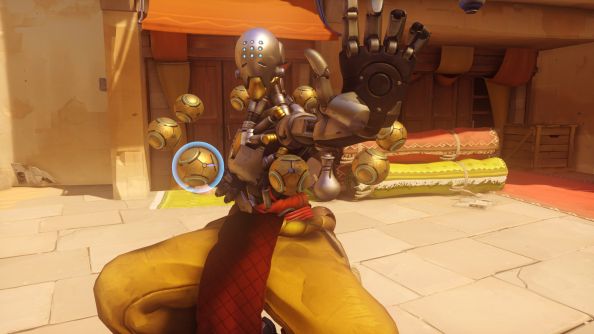 In playing, and watching those playing, it’s clear that some of those who pick up the game for the first time simply don’t get it. It’s too mad, too weird, too different. In one match I took part in, our team simply couldn’t make it out of the spawn, so great was the disparity in skill between us, and our opponents. My team just couldn’t get their abilities and character classes to gel.

But when it works, it really is magical. It creates glorious situations. Here is Winston, a 600 pound gorilla in a robot suit losing his shit (it’s called Primal Rage) on a group of turrets while being healed by a guardian angel. Here is a pair of Bastion robots leapfrogging each-other to lock down a control point. Here is a Tracer, a cocky young scout, using her blink and recall to sticky a group of enemies, killing five in a single blast. Here is Mercy, using her group resurrection to immediately bring them back to life, much to the disgust of the enemy team.

I really, really like Overwatch. And I wasn’t alone. Walking the halls of Blizzcon, practically every overheard conversation was about the game – about the balance, about the heroes, about what cool kill or play they’d just experienced. It has, to my mind, the most potential of any Blizzard game since World of Warcraft.

WoW’s success has always defined Blizzard. But it’s clear that trying to recreate or top World of Warcraft drained an incredible amount of energy from the company.

It’s telling that for now, Overwatch’s business models or monetisation or markets or skins or eSports or anything that would distract from the raw energy of the game are not up for discussion. All that matters is the fizz, the sheer joy of playing something that feels familiar, but absolutely fresh.

Overwatch matters to Blizzard. “It felt like there was a spark there that almost got eaten by this mammoth business,” says Metzen. I feel like we didn’t go anywhere, but we’re back.”

For all the speculation, I think it would be a shame to make the game free-to-play with class purchases, like Heroes of the Storm or League of Legends. Locking hero designs behind a paywall would really hurt the sheer joy of the game design. Far better, I think, to put the game out for a relatively low price and then put in skin and cosmetic purchases for those that want them.

I think it’s going to make an excellent eSport when the time comes. I’m not convinced the basic mode, where everyone can pick any class, will work as a spectator sport. It would probably benefit in those situations with an equivalent to TF2’s highlander mode, where character choices are locked in before the match begins.

Expect a bit of interest around how servers are hosted and defined. They haven’t talked about this section yet, but, in my opinion, the chances of players owning their own Overwatch server are slim to nill. Everything will surely exist within Battle.net, with the service spinning up game instances as and when they are needed. Hawken tried something similar, and it worked, although players still demanded a server browser and the chance to host their own. 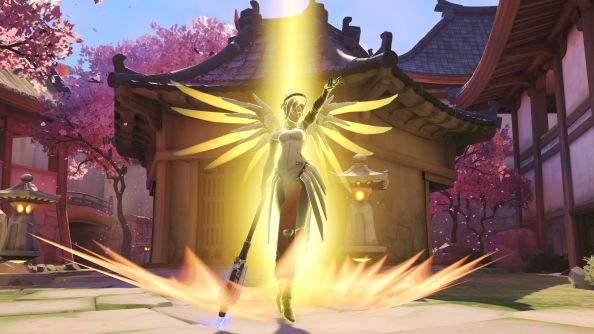 In the announcement, Blizzard played up the idea that it was less lethal than Call of Duty, and that engagements last longer. That’s true to a point, but it’s still a blisteringly fast and intense game. There’s so much going on – particularly with the movement abilities, that the game still favours very fast reactions.

I really like the way the game highlights ‘plays’. At the end of each round, it will pick out a ‘play of the match’ and repeat it, like Call of Duty’s kill-cam, from the player’s perspective. One of the problem’s of TF2’s design, in my mind, is that the maps are balanced in lower skill rounds around how long it takes for players to spawn and walk back to the current combat area. Overwatch’s maps follow exactly the same pattern. Like in TF2, if you’re losing, that is significantly unfun. I do wonder how that will hold up in higher skill levels.

Overwatch’s cinematic trailer is beyond beautiful. Watch it again, and notice the craft and emotional depth: how the bigger brother’s faith and optimism reappears after helping Tracer and Winston, or the little Murloc design on the younger brother’s cast. Tracer’s voice is bloody irritating though.

On my empty seeming life

I wish I could play more Overwatch.