Wrecking Ball, who we all know is more properly referred to as Hammond, has a brand new highlight intro that harkens back to a more innocent time online: a time when a surprised gopher (or possibly a chipmunk, nobody was really sure) turned and took the internet by storm.

Yes, Hammond’s new highlight intro has him recreating the viral ‘Dramatic Chipmunk’ clip from way back in 2007, which was the year that saw the release of the original BioShock, the first Witcher, and Portal.

Sitting atop his ball-mech with his back to the camera, Hammond is introduced with the orchestral stinger from classic film and television – bam BAM baaaah! Just as it crescendos to its climax, Hammond whips around to face the audience, and it’s possible to detect a sharp dagger of suspicion in his beady little black eyes. Or maybe it’s just the music. Who knows?

In any case, it’s a nice callback to an earlier age of online. Who could have guessed then that we’d all be ‘tweeting’ things at each other and getting angry about tick rates in something called ‘battle royale’? When the Dramatic Chipmunk (it’s a gopher – or maybe a marmot?) was making the rounds, none of us had any idea that Overwatch would ever even exist.

Anyway, here’s the highlight into with all skins, courtesy of YouTuber cakechievables: 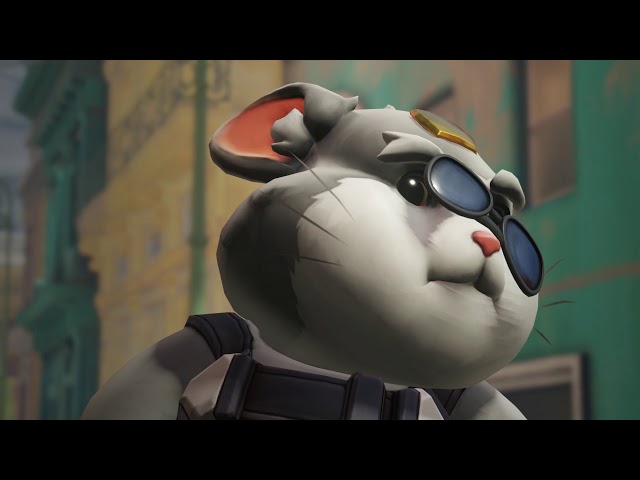 A nice touch to the animation is how it works with the High Roller skin, which was introduced for the Storm Rising event. If you’ve got that equipped, Hammond’s sunglasses will slip off his little nose at the end of his intro.

Friendship is magic: The best multiplayer games on PC

That event is still live, and runs through May 6. It’s a chance to check out a brand new co-op mission, and potentially get some time in with Overwatch’s newest hero, Baptiste.

Of course, what we’re all after is that new dramatic highlight intro.