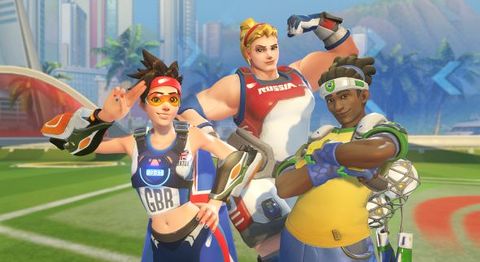 Update August 2, 2016: Jeff Kaplan has released a video talking about Blizzard’s plans for future seasonal content, as well as how this Summer Games Overwatch season came about.

In the video, Kaplan speaks about Blizzard’s rich history with hosting events around important times. He says they see their games as a living thing, and that means they have to keep the heart of their creations beating through constant surprises and new content.

Which of these Overwatch heroes are you wanting something new for?

Kaplan says Blizzard will react to feedback, so be sure to tell Blizzard you want to buy limited-time Loot Boxes with coins next time. That’s a much better solution than encouraging people to spend real cash on what’s essentially gambling. Anyway, here’s the video:

From today, and throughout the event, any new Loot Boxes you earn or purchase will be jazzed up to suit the sporty theme, and their contents should include one of many limited-time cosmetic items commemorating the Summer Games – including themed sprays, emotes, victory poses, highlight intros, player icons, and some special skins.

These can’t be purchased with credits, but each seasonal Loot Box you receive is guaranteed to contain at least one item from our Summer Games 2016 collection. Seems like a good way to get people buying the seasonal Loot Boxes, of which it seems like there will be a few variations. RIP your bank balance.

To make it so more people spend a silly amount of cash on the boxes, the new cosmetics will only be available until August 22, though any you earn during the event you obviously get to keep. Here’s a trailer for the sporty spoils:

Original Story August 2, 2016: A new set of Overwatch skins are coming today, all based around the Olympic Games. They’ll arrive in special, Olympics-branded loot boxes that will be on sale for a limited time, probably arriving with tonight’s patch. The information comes from a box sent to streamer LacedUpLauren, which contained images of the skins that she then posted online. There is also a Playstation Store listing for the new loot boxes.

You can see close up images of the next skins, which include a Track & Field skin for Tracer, a football skin for Lucio and a Weightlifting skin for (obviously) Zarya, over on Lauren’s twitter. She also livestreamed opening the box she was sent on Twitch.

As for how you or I will attain them in-game, this Playstation Store listing for new Olympic boxes is as much as we have to go on. It says that the new Summer Games Loot Boxes will be “available to purchase or earn in-game until 8/22/16 at 11:59pm PT.”

The new skins won’t be attainable through credits, meaning your stockpile’s useless if you want them, but the new boxes are guaranteed to have “at least one” of the new set of skins, sprays, highlight intros, emotes, victory poses, player icons and voice lines – also confirming all of those will be available too. Once the timer is up (and the Games are over) the boxes won’t be on sale or earnable any more.

It’s not confirmed exactly how they will be earned, and Blizzard will likely clarify in patch notes later tonight, however it’s probable that either the new boxes will replace all level-up drops or a random amount of level-up drops from now until the end date.

Look out for more information on the new cosmetics tonight. There’s also some debate if there is also a new map and game mode coming, possibly revolving around goal-scoring on what looks like a new map, as seen in our header image.