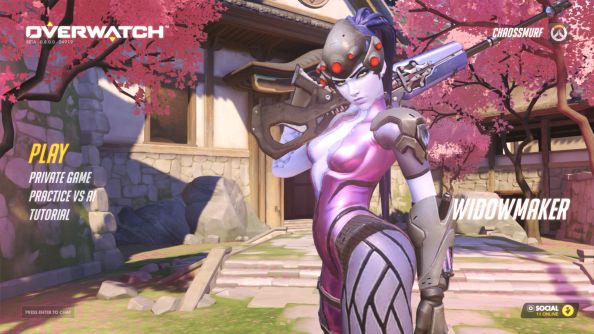 I’ve had six hours of play with Overwatch, which you hopefully (over)watched on our Twitch channel, and I’m not sure if I know even the first thing about it yet. It’s that deep. However, I can certainly answer some key questions, like ‘how much does it have in common with TF2?’, ‘does it have a high skill ceiling?’ and ‘how great is the big fat lad with the shotgun?’

Get familiar with all the Overwatch characters.

While the Team Fortress comparison is now beyond trite, it turns out it is still the easiest way to describe the game. Overwatch isn’t TF2, but you’ll be constantly reminded of it while playing. There’s the art style and team combat surface level stuff, obviously, but each hero also feels like they were designed by someone who half-remembered a dream they had once about Valve’s game. You can see the throughline from that game to what Blizzard have done.

Take Tracer, cockey-voiced frontwoman. She’s a teleporting, time-travelling, bomb-throwing speedster. While her endless blinking and survival techniques don’t play much like anything I’ve seen before, in getting to grips with her playstyle there’s a much stronger similarity than the clear inspirations the Scout provided – she’s a Spy. Getting in behind enemy lines, picking off key targets and then getting out unharmed. She’s even better at it than he ever was: rewinding time to get all your health back is a lot more reliable than going invisible. 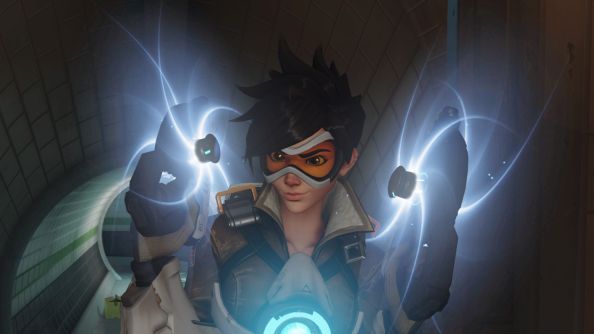 She’s also rock-hard to get right. She can get about a second of bullets out of her rapid firing pistols before they need reloading, and all of the shots must hit to kill squishier targets. The cooldowns of her abilities are long, and being caught without a rewind will quickly lead to your death if you’ve blinked in unawares. You need to know the layout of every map to quickly make it to health packs and out of lines of sight, and be able to choose the best of these options in the fractions of seconds your tiny health pool allows for.

It’s fun. Real fun – and given some of the stuff I managed to pull off and saw being done by others out there, she may be too strong. Once the aiming experts and split-second masterminds get to grips with Tracer, they may be unstoppable. But that’s not uncommon at this stage of the game’s lifecycle. Every single hero I’ve come across has seemed alternately useless in unskilled hands – my first and only game on dwarven engineer Torbjörn is testament to that – and stunningly overpowered when played right.

Larger than life pig-man Roadhog became my go-to. He has the ‘Pudge hook’, able to throw out a chain of metal and wrap it around foes to immobilise and drag them close. It is unbelievably satisfying to hit, particularly as it’s usually followed up by swift death from a blast of his immensely powerful shotgun. He’s useless at long range, but a massive health pool of 600 (four times that of poor Tracer) makes him tough to take down. He also has one of the most broken self-heals I’ve ever seen in a video game, instantly restoring half that full amount and continuing to grant health for some time afterwards. Even under sustained fire from multiple sources, he’s an absolute bastard to kill. 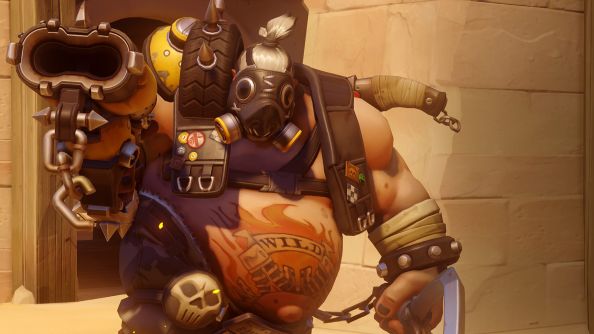 He epitomises how the formula should work: overpowered unless played properly against, alternately requiring key timing, aiming or both to profit in different situations. They aren’t all like that. Reinhardt, hammer-wielding robo-legionnaire, and the afore-mentioned Torbjörn both struck me as having strong abilities, but ones that are fundamentally boring to play with or against. Reinhardt has an almost-unbreakable shield that protects everyone around him, requiring only that a button be held and the camera pointed towards the enemy. Torbjörn’s turrets are auto-firing and fast-damaging, needing only good placement to be effective (though are mercifully nowhere near as powerful as TF2’s versions).

They’re just walls that need to be punched through or moved around, and doing so in a team of uncoordinated randoms is difficult. Blizzard have said in the past that repicking heroes to counter others will be important, and I’ll be trying that more soon, but I’d prefer these problem children had more interesting options available to them.

What’s promising is what Jeff Kaplan said in his first Overwatch development log yesterday about how early this beta is in the process, and how much they’re willing to change. It’s clear that if certain heroes aren’t working, they’re more than able reboot them. The same is true of mechanics, maps – the lot. They don’t believe it has that Blizzard polish yet, and it certainly feels like a beta when it comes to diversity of modes, but it’s already one of my favourite games of the year. I can’t wait to see what comes next.