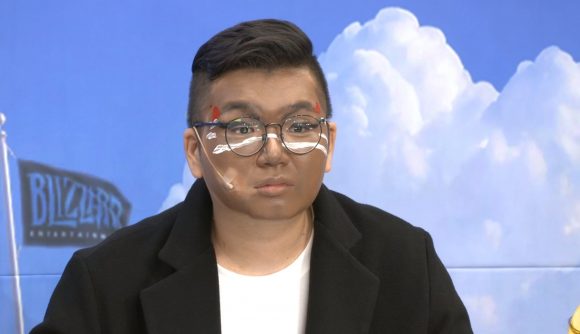 November 10 Blizzard has issued an apology over a broadcaster’s use of blackface in an official Overwatch stream.

During a stream Thursday on the official South Korean Overwatch channel, one member of the broadcast team applied Doomfist-style makeup to fellow caster Kim ‘Binbon’ Jin Young. That included not just the hero’s signature white markings, but a layer applied the whole face meant to resemble the characters dark skin. In short, it was blackface.

In strictest terms, blackface is a type of makeup used predominantly in the 19th and early 20th centuries by actors to portray caricatures of black people. The practice is so closely associated with mockery and racial stereotyping that any form of makeup meant to make somebody look like a race they’re not is typically seen as offensive.

Thursday’s stream caught the attention of Western fans thanks to a screen capture from Mafirva on Twitter. The actual stream can be seen here on Twitch – the makeup segment starts at about an hour and two minutes into the broadcast.

Blizzard issued an official apology in a statement to Dot Esports following the incident.

“What happened on the official Korean stream was inappropriate and clearly not in keeping with the global spirit of Overwatch,” a company representative said. “We apologize for the insensitivity, and we are taking measures to ensure that everyone involved in official broadcasts in the region is better aware of the offensive nature of blackface makeup around the world.”