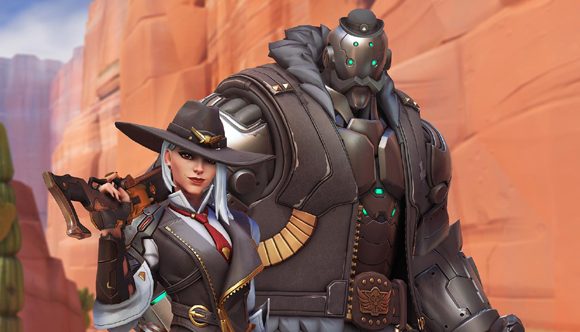 Ashe is Overwatch’s latest hero character, who adds quick-shot thrills and sniping skills to the game’s roster. Her ultimate brings in her robot pal Bob, who literally acts as a seventh member of your Overwatch squad – which includes the ability to take capture points, even if you’re not there to help him.

When summoned by the player as Ashe, Bob is a useful member of the team, with 1200 hit points of damage so he can take a lot of punishment. You can order him a little, and he’ll do an initial charge after summoning, but then he’ll act like an AI-driven bona-fide member of your team – hunting for opponents and going for objectives.

And of course, as Reddit user Raxyx7 discovered, if you order him to take a capture point he’ll do so – even if the player as Ashe dies before he takes it. In the video Raxyx7 posted, they’re defending a capture point as Ashe and call Bob down on the point to help. They back away from the capture area, with Bob still on it, and die just outside the area – but the capture meter continues to increase, and they both gain that point and win the match, entirely thanks to Bob.

Ashe and Bob were added a few days ago, just after Blizzcon. Ashe is a fairly straightforward hero character, especially compared to the insane hamster Wrecking Ball who was added before her. She has a rifle, shotgun, dynamite, and is designed as a precision long-range sniper character.

The inclusion of B.O.B. as Ashe’s ultimate, of course, changes her dynamic a lot. With an AI-driven extra character who can conquer capture points and secure victory even without a player around to help, Ashe clearly isn’t just a long range-focused femme fatale with a sniper rifle. She’s live on the PTR now if you want to give her a go – and Bob too, of course.