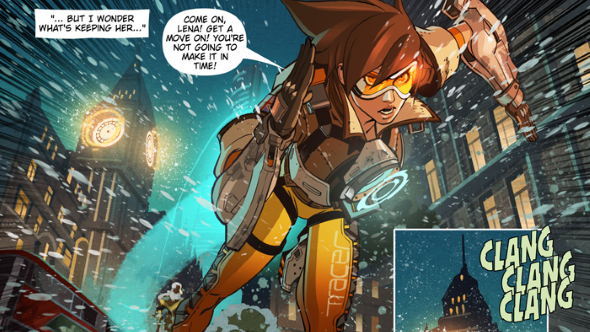 With a new event on the horizon, it’s natural to expect new skins, a new mode and more in Overwatch. However, what’s also on the way is a new lore comic, expanding what we know about the universe itself. Jeff Kaplan says he thinks it’s Blizzard’s “best yet.”

Here’s what we know about the Overwatch King’s Row Uprising event so far.

“The next comic that comes out I think is our best comic we’ve done yet. I’m sure the fans will tell me if I’m wrong on that but I’ve never been more excited about a comic as I am with the next one,” he predicts. We can only assume it’s based around the King’s Row Uprising mentioned in the video tease released this week, that he also gave us more details.

As for a release date, looks like it’s arriving faster than you might think: “That’s coming out very, very soon. Sooner than people realise,” he clarifies, laughing that it’s even “sooner than Soon™.” Smart money would suggest that means this week, ahead of the event itself. Bastion’s squid-based comic released on a Thursday, and that looks likely to repeat – if it isn’t even sooner, of course.

What we can promise a release date for is this week’s Overwatch This, which will feature our full, half-hour interview with the game director. Kaplan talks Lucio, Winston, Orisa, the first year of the game, what happens next and how he gets some of the game’s best feedback at the dinner table. All that and more on our YouTube channel tomorrow.