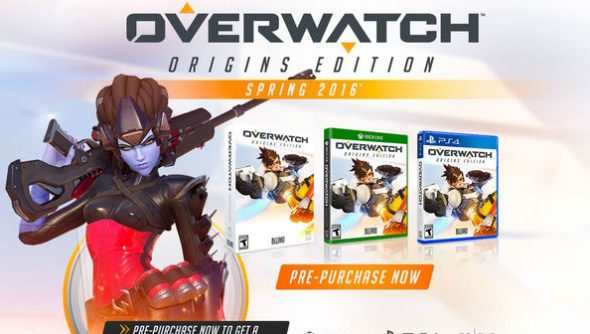 Overwatch, Blizzard’s new class-based shooter, has been confirmed at BlizzCon to be coming to Xbox One and PS4 simultaneously with PC on launch next spring.

Alongside the announcement, game director Jeff Kaplan also revealed three new characters – Mei, Genji and the awaited StarCraft 2 pro D.va – who will be among the 21 available on launch.

The game will be sold as a retail box, not free-to-play, and will also come in a launch package as the Origins Edition, which will include five skins for heroes which relate to their backstories (hence the name). The edition will also feature unlockable goodies for other games in the Blizzard universe, including a Winston pet in WoW, and Tracer as an entirely new hero in Heroes of the Storm.

The new heroes in the announcement have been teased prior to BlizzCon by blog posts on the Overwatch site, and Mei-Ling, a climatologist, appears to have many ice-theme-appropriate skills at her disposal. Genji appears to have a long feuding relationship with Hanzo, his brother, and D.va has a mech for her ultimate.

Most details of the announcement were leaked earlier today by an Amazon price listing for the Xbox One collector’s edition, which also had a release date of June 21. However another collector’s edition, featuring a bronze Soldier:76 statuette, was shown off during the BlizzCon opening ceremony.