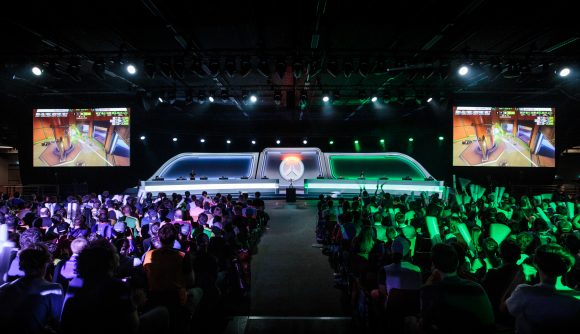 January 5, 2019 After an investigation, Blizzard has confirmed that Ellie wasn’t who they said they were.

January 4, 2019 Further reports on Overwatch Contenders player Ellie suggest that it’s not her at the controls.

Overwatch Contenders player Ellie stepped down from her team, Second Wind, after a wave of doxxing threats and harassment doubting their existence – and now multiple sources are reporting that it was indeed not them at the controls. Instead, it seems it was a ladder player called Punisher.

Second Wind issued an official statement about the controversy late Friday on Twitter. In it, team management explains that they failed to properly vet Ellie out of an urgent need to fill a slot on the roster, and had not anticipated the scale of the response – both positive and negative – to their being the first Contenders team to hire a female player.

“As of today, Blizzard had [sic] gotten back to us on the background of Ellie, and notified us that they were not who they claimed to be, and discovered that the Ellie account was used for purposes we do not support,” the statement reads. “We apologize to the community as a whole for not handling this situation better when we should have, and we will aim to do better.”

Esports consultant Rod Breslau reports that Ellie sent messages to teammates confirming that they haven’t been the one playing. Ellie claims to be a 17-year-old girl, but one who is “not good” at Overwatch. Neither players or management at Second Wind knew, and Blizzard is now holding a meeting with them.

Aspen, a streamer for Cloud9, says that Punisher confirmed yesterday that he was the player posing as Ellie, in a sort of “social experiment.” Exactly what that experiment was intended to accomplish is unclear – as is whether or not Punisher was the only other player involved in faking Ellie’s account. The only thing that appears to have been accomplished here is encouraging further suspicion if further female players make it to Contenders – though certainly, it seems that teams could stand to have better vetting processes.

As to the community’s response, Aspen suggests the story would be the same for other female players. “It’s like you need to show them your birth certificate if you want to go pro. That’s how garbage it is.”

Punisher, the player assumed to have played as Ellie, is just another NA ladder player. Not a pro smurf or semipro. It is also possible more than one person played under her name.

Correction: The meeting between Blizzard and SW has not yet occurred, will happen in the next hour.

Vancouver Titans coach Harsha Bandi says that with this news, “the worst possible scenario comes to pass. Can only hope that people learn from this incident. Harassment is obviously never okay, regardless of whether or not Ellie told the truth.”

Some commenters argued that Ellie’s low account level makes their sudden rise to become a top-ten ranked DPS player suspicious – their single bronze star indicated a relatively low play time – and suggested they might be smurfing, playing on a boosted account, or was otherwise being dishonest about her identity. Before their departure, Ellie was also the only player on Second Wind’s roster to not have their full legal name listed on the Overwatch Contenders website.

There have been numerous reports of players attempting to dox Ellie, some of which even accuse them of faking their identity using a voice changer. Ellie’s account has tweeted screenshots of a Discord chat in which a user named Haunt suggests doxxing them, in his own words, “not for malicious intent, just to figure shit out.” Haunt is another high-level Overwatch player who has been banned on both Overwatch and Twitter for his conduct.

Read more: Overwatch is one of the best FPS games on PC

The team’s owner, Justin Hughes, took to Twitter to comment on the situation, suggesting that the reactions to Ellie’s presence on the team, both positive and negative, proved too much for the team to cope with.

(2/2) their Messiah. Between needing a player to live up to huge expectations and having to question their own safety, it seems that the OW community isn't ready to just view a player as just a player. We wanted a player, but it seemed like the public wanted something else.

Hughes retweeted Second Wind’s official statement, but has not made any further public comment about the situation.

Currently, the only female player in the Overwatch League is Kim ‘Geguri’ Se-Yeon, who was signed to Shanghai Dragons last year.