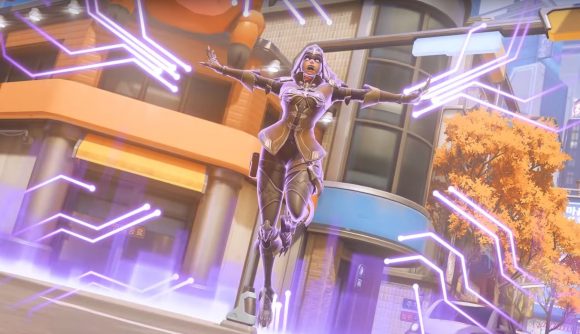 You don’t need to buy a virtual ticket to BlizzCon to get your hands on the next Overwatch Legendary skin. The very flashy Demon Hunter Sombra was unveiled in a tweet last night, where she was labelled as an “exclusive legendary skin,” that you can only access by purchasing a ticket for this year’s event. The fine print, however, says otherwise.

Over on the BlizzCon website, Blizzard referenced a collection of goodies for games across the developer’s entire catalogue. It’s two months until the event itself kicks off, but if you pick up a virtual ticket now, you can get access to in-game items for World of Warcraft, both StarCraft games, Hearthstone, Diablo III, and Heroes of the Storm. And Overwatch, of course.

Except you’ll be able to get your hands on some of that content eventually, whether or not you buy into the virtual ticket. At the bottom of that BlizzCon post, there’s some small print that says “the in-game items for Overwatch, StarCraft II, and StarCraft: Remastered will also be available separately in 2019.”

That means that while you can get Demon Hunter Sombra right now if you want to buy the virtual ticket, waiting a few months will let you simply buy the new skin in the store. Admittedly, we don’t know exactly when the new skin will arrive there, but I don’t think it will take Blizzard all that long.

Step out of the shadows with DEMON HUNTER SOMBRA!

Of course, there’s still plenty more exclusive content available as part of the virtual ticket, including what’s on offer for all of those other games. The virtual ticket also, of course, lets you watch all of the developer panels that take place at BlizzCon, so if you’re already picked one up, it could still be worth holding on to.