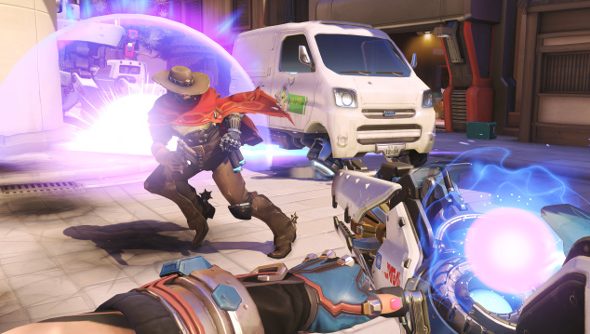 Overwatch stretches the shooter genre to the breaking point. While a few characters broadly fit classic team-shooter archetypes, like the sniper Widowmaker and the heavy, tanky Gatling robot Bastion, many of the characters seem more like superheroes or MOBA champions. There’s not a character in the game who doesn’t somehow twist or break Overwatch’s rules via movement, combat abilities, or buffs on other players.

At PAX East, I spent a few minutes chatting with Overwatch designer Jeffrey Kaplan, as he explained Blizzard’s approach to character design, map balancing, and how they use in-game data to assist the design process.

“Our inspiration comes from all over, and that’s one of the things I love about the Overwatch team, is that the diverse backgrounds of the team. We have hardcore fighting games enthusiasts, we’ve got MOBA fans, and shooter fans, MMO fans. We try to draw from all different genres — even the shooter itself,” Kaplan explained.

We were talking about the new characters, especially the instantly popular tank Zarya — who reminded me of a Russian Rosie the Riveter with a plasma cannon — and the “Man with No Name”-inspired McCree. The conversation came around to the radically different roles, super-powers, and appearance of the Overwatch cast. They don’t stick to the classic shooter mold, especially in this era of military shooters, and a lot of characters go far beyond the standard archetypes for “support, sniper, scout”.

So without an established roadmap to work from, where are Blizzard pulling their inspiration for the art and mechanical design of their Overwatch gang? 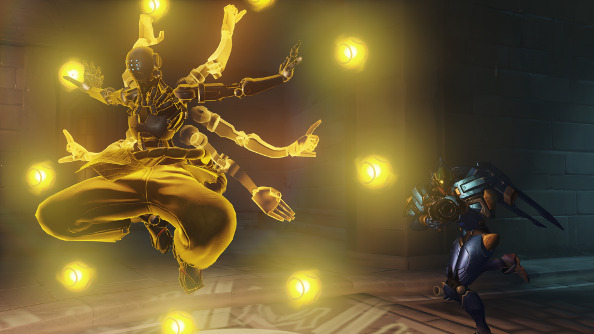 “We have a couple of ways where the ideas come from,” Kaplan said. “So we have our creative director, Chris Metzen, who is like, ‘This is a character I’ve been dreaming of for years, and I can’t wait to bring it to the life in Overwatch.’ We’ve got guys like the concept artist, Arnold Tsang, who one day will draw, say, Hanzo, and say, ‘Well, I don’t know what he does, but we’re gonna make that’. And then we have guys like our lead hero designer, Jeff Goodman, who will purely mechanically come up with a hero. He’ll say ‘I want a hero who can teleport short distances, and can recall later. I don’t know who this hero is, who they look like or their backstory.’”

That’s how Zenyatta began life. The team knew they wanted a kind of support caster who could buff his friends and inflict penalties on enemies. The character appearance and backstory flowed from that. With Reaper, that process was reversed: he started out as some cool artwork. The Overwatch team loved the character in the picture, but didn’t have the foggiest idea what he’d do.

Kaplan is really trying to embrace the sheer possibilities of Overwatch. It’s a chance to design a shooter without any inhibitions. 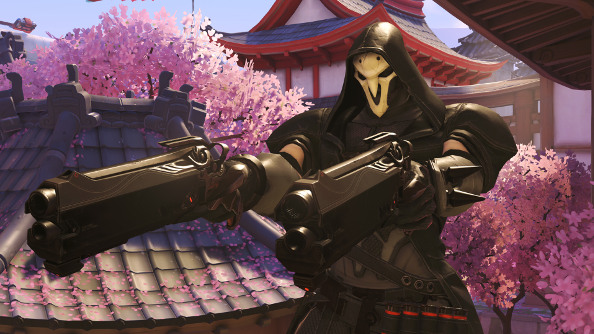 While Kaplan loves military shooters, and said he’s lost countless hours to the Battlefield and Call of Duty series over the past several years, he feels they suffer from real-world constraints. In this regard, Overwatch is almost a throwback.

“We were talking about earlier about fantasy fulfillment, but those games have an obligation to be like ‘Well what’s it actually feel like to be in a helicopter?’ or ‘’What’s this gun actually feel like?’ And we’re kind of free from that,” he said. “And if you think about shooters before [this] ‘military era’ came over …shooters did have a lot of crazy movement and abilities. When I think of the way characters moved and the type of characters you’d see in games such as Quake III and Unreal Tournament, I almost feel like I left a piece of shooter heritage behind, that we forgot about.”

On the other hand, even Unreal Tournament and Quake 3 were mostly driven by the weapons that were available in the game. Their maps and game modes didn’t have to be designed around a huge cast of characters who could all break the game in a their own unique ways. Nor did they have to wrestle with an ever-expanding cast.

Trying to design a playing field around the hyper-mobile Tracer, who teleports constantly, or the walking meat-shield Reinhardt, seems daunting from an outsider’s perspective. Map balance can be incredibly hard to get right in a class-based shooter. TF2, for example, still has levels that trend toward endless stalemate, despite years of updates and balancing.

“We talk a ton about it,” Kaplan admitted. “We have an amazing level design lead, Aaron Keller, who’s also an assistant game director on the game. And we tease him a lot, because we come up to [the map team] and say, ‘Oh I can’t wait to come up with a hero that’ll break that map.’ On other games, they’d be like ‘No, we can’t do that, it’ll totally break the map’’, but we just think it’s a lot of fun to try.” 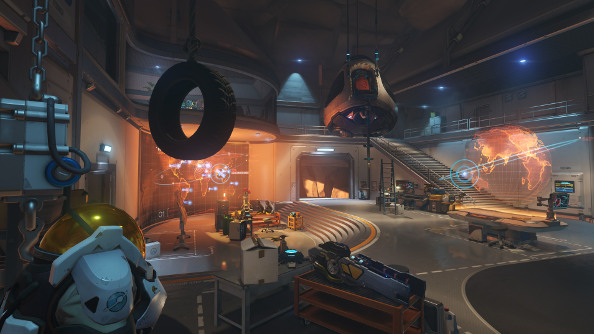 While Blizzard target a 50/50 win rate for attackers and defenders, their top priority is drama. Beyond that, however, they want to make sure that every character has interesting options on every map. “We might do what we call a ‘high pass’ of a map, where we look at the snipers and the fliers, and the people who can get up to interesting places. We then do our ‘Reaper pass’, because we know Reaper is going to tunnel around — if he’s in open areas, he’s just gonna get sniped in the head, so does he have an alternate route to go though?”

Blizzard are aided in their work by a mountain of metrics from every game of Overwatch ever played. Kaplan admitted he was really excited about an event like PAX because it gets new characters in front of a massive audience of Overwatch newbies, and he was looking forward to sifting through the info.

Yet he’s quick to caution against relying too much on big-D “Data” to assist design.

“We don’t like to use the data to drive design,” he said. “We use the data to double-check our design instincts. So an example is if we think this one spot is too favourable to a certain hero: that’s a gut feeling we have, so let’s double check it with the data to see if that supports [it]. If we feel like on a certain map, defenders are winning way more than attackers, we’ll pull the data and look at it.”

But data is also a potential morass of information and interpretation.

“It gets really scary when you try and use analytics to drive decision-making, because you get into this weird place where you [look at], say, score per second on the heroes,” he said. “The desire is to have them all as close to each other as possible, but… you can get lost in ‘This ones at the bottom, so this one must be broken!’

“But when you pull back and objectively look at it, well there’s going to be some deviation – someone has to be at the bottom,” he continued. “I should be more concerned that the deviation is within the boundaries that we’re hoping for, and less about who’s at the bottom. …It’s just an example as to how you can go too far down the rabbit hole with stats.” 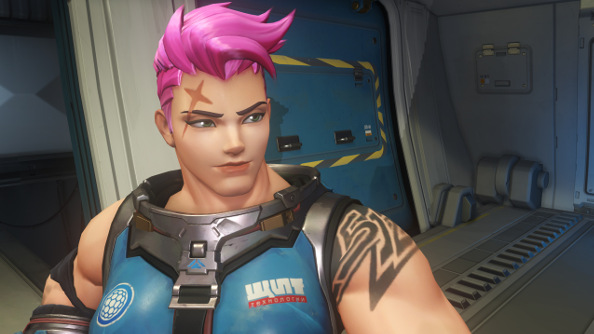 At the end of the interview, I asked Kaplan whether he and the Overwatch team were hoping to see the Overwatch cast included in Heroes of the Storm. Certainly, the way they are designed, many of them seem like natural fits in a MOBA. Kaplan simply smiled and waved-off the question.

“It’d be great if that happened,” he said. “If we proved ourselves worthy, you know?”

But for now, Kaplan is concerned with making sure that he is giving great characters like Zarya and Tracer an equally great game to inhabit.

{"schema":{"page":{"content":{"headline":"Overwatch designer Jeffrey Kaplan on the art and science of building a new breed of shooter","type":"news","category":"overwatch"},"user":{"loginstatus":false},"game":{"publisher":"Blizzard Entertainment","genre":"FPS","title":"Overwatch","genres":["FPS","esports"]}}}}