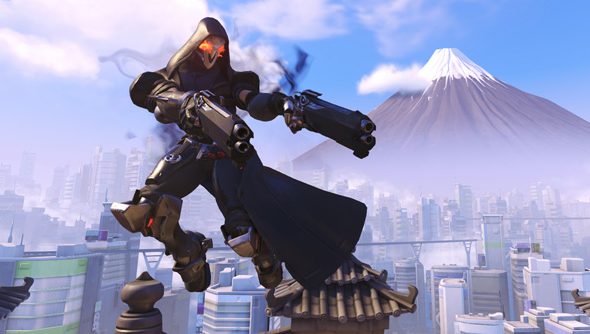 To say that Overwatch is another class-based first-person shooter in a period where that appears to be the soup du jour is to gloss over the studio behind said soup. Blizzard’s chief-most skill is to take a genre that is familiar to many and make it known to far, far more.

While the effectiveness of this approach may be questionable when looking at the relative populations of Heroes of the Storm and its bigger brothers, you’d be hard-pressed to find a Magic: The Gathering aficionado before tripping over at least two-dozen Annoy-o-trons or Grim Patrons.

Alongside Hearthstone, WoW and Heroes at last weekend’s European Road to BlizzCon, the Blizzard faithful were also given a chance to get to grips with the new IP. A rare occasion, for a studio that has seemingly made its fortune off variations on the same two fantasy settings of Orcs vs Aliens.

Looking for something to tide you over until Overwatch? Here are the best PC first person shooters.

But, speaking to Overwatch’s principal game designer, Geoff Goodman, the game represents far more than just a new stage with new actors. The entire theatre is new ground to the team, and they’re getting to grips with what that means for them, and others who have never set foot there too. 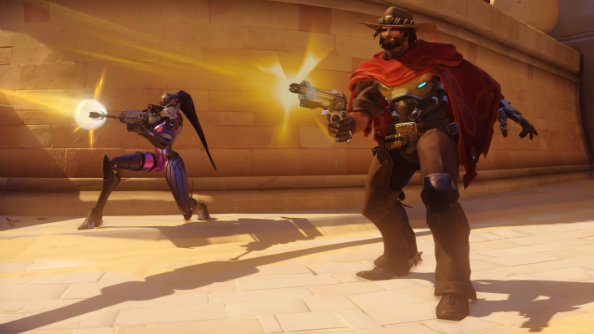 “This is our first foray into the FPS genre, and there’s a lot of it that comes down to taking the core that we want to do and trying to trim off the edges and streamline it,” acknowledges Goodman. “So for example we have all these abilities which are important and help separate the characters, but they typically only have one weapon, with a few exceptions.”

The lack of weapon switching is immediately noticeable for anyone who may have experience in previous class-based shooters *cough* TF2 *cough*. As a result, Goodman says, focus is far easier to maintain, allowing you to concentrate on the overall objective or team strategy at play. While it is nice to not have to fumble around with hot-swapping weapons during a tense firefight, you are left fairly vulnerable during reload periods where otherwise you may have reached for a sidearm. But it does help to simplify the characters for those new to the game, and reduce the total number of skills or options for those who are deeper into things.

And there is a lot of depth to be found in Overwatch for the more competitive-minded player. “The good news for us is that we get a lot of depth for free because being an FPS there’s a lot of skill in being able to manoeuvre around the world and aim correctly,” explains Goodman. “That said we have a lot of characters that have a depth to them that isn’t solely based around those core skills, which is pretty nice.”

Characters like Winston, the intelligent ape from Overwatch’s reveal cinematic at last year’s BlizzCon. As a Tank character, his uses fall far outside of producing an MLG montage showreel of long-range headshots. He’s beefy and likes to get in the face of enemies to deploy his ultimate, a furious rage which makes him almost invulnerable while boosting his melee and jumping abilities.

“Thinking about whether you can jump into a group of enemies and take a certain amount of damage to have your ultimate ready, and hit it before you die, all that sort of thinking,” Goodman says. “It’s a different kind of skill, so we try to do that in a lot of places, too. But a lot of it comes down to adding simple abilities which look easy on the face of them, but they have a lot of depth in the way that you not only use them with the rest of your own kit, but especially with your team-mates.”

As with any other competitive game, teamplay is above all the key to success. On the show floor, with a bank of PCs set up in a row but no voice communication to speak of, the agony of having team-mates so close yet unable to hear your calls was starkly at the front of my mind. For any chance of co-ordinated success, voice and – more importantly – co-operation will be absolutely mandatory.

There are many helpful auto-barks from your in-game team-mates, however, as context-sensitive AI detects things such as a team-mate spotting an enemy on your character’s six and calling out, “Behind you!” as a warning. So even in pubs, with unfriendly allies, you’ll have a fighting chance of getting some useful intel. But for any hope of making the big leagues, communication and planning will be key.

And there’s plenty to plan, with an ever-growing roster of versatile characters to choose, and specific situations to use them in. “It’s not really an explicit goal to make sure that every objective point on the map is viable for every character,” reveals Goodman. “But it’s actually been a design goal to make sure that not have every character be equally powerful, in a way that we want the maps to feel very diverse.” 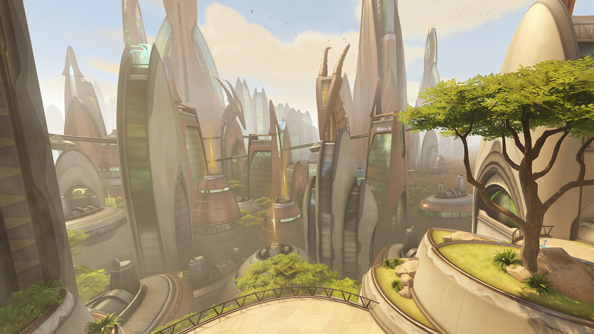 Each map has an assortment of balconies, long flanking routes, tight bottlenecks, open spaces and long straights. Depending on your character’s effective range, maneuverability and hardiness, there are only certain points in each map you’ll have any chance of making an impact. As a result, a MOBA-like selection phase where each player picks one character per map is unlikely to be the norm.

“The hope is that competitive teams will be swapping,” Goodman explains. “I think in a way that heroes not only work together as a group, but how some are good at killing others or certain combinations are good at stopping certain strategies. I think that’s all really healthy.”

Despite this being true – to deal with a problem Pharah hovering in the air raining rockets down upon us we pulled out a sniper like Widowmaker or Hanzo to knock them down – there are no 100% hard counters for every character.

“It’s healthy to have a certain amount of counters, but that said, we don’t really want a rock, paper, scissors system, where you’ll think you can’t play one character because they have another one that completely shuts you down. So there’s a bit of balance there, to make sure it’s not overwhelming the game, but it’s definitely part of the strategy.” 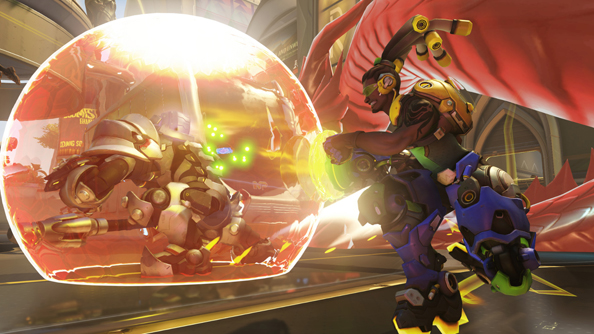 It certainly feels possible to hold your own with most heroes against any other. For example, bumbling around as the dwarven mechanic Torbjorn I was pounced on by Winston in a primal rage. Given that most of Torbjorn’s utility is in the turrets he constructs and the armour he puts down (both requiring scrap, a commodity I was blundering about in search of before realising it dropped from dead enemies) I almost gave up hope on surviving the encounter. But, as his secondary fire is a buckshot of molten lead, and Winston’s head is in a nice central and low position on his general outline, he was down in a single magazine of frenzied fire.

This individual strength is something that Geoff wants to keep in the game, even when it comes to competitive balancing. “At the end of the day, the characters are intended to be all overpowered, like the old adage ‘if everything is overpowered, nothing is overpowered’,” he says. “We definitely don’t want to take the approach where we’re balancing things to mediocrity, so then the abilities aren’t really that great and you don’t have as much fun.”

But playing out that same balancing act at all levels of skill has become something of a challenge to the team, especially given Blizzard’s reputation for bringing new players to a genre. “That’s the hardest thing, for example right now, there’s some theory and statistics to back this up a little bit, defence tends to win at the lower skill level,” Goodman admits. “If you watch people play down at the show here, or you get some anecdotal feedback, you hear that Torbjorn and Bastion are just way too strong, you can’t get past them. But at the higher skill levels those classes aren’t even used sometimes just because they’re so counterable, once you understand the game enough.” 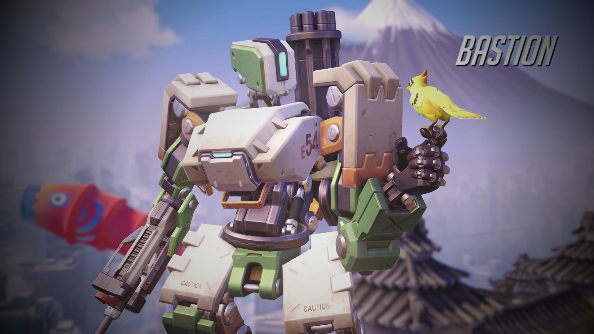 Bastion, a robot that transforms itself into an immobile turret, does initially seem like a difficult enemy to deal with. However, more advanced players will quickly figure out that when in sentry mode, his back is completely exposed and his turning circle limited, so a Tracer can dash in behind and polish him off quickly.

“That’s one of the most challenging things, from an individual character balance standpoint – a character like Bastion especially, is the best example of this – you go to any show and ask anyone who is the most OP and they’ll say Bastion because he’s ridiculous, but he gets literally no play any higher up,” says Goodman. “We have these design meetings and I brought it up in a recent one where I said it’s not great, he’s kind of in a bad spot where he’s too good at the lower end, I don’t want to push people out of the game or make it a frustrating first experience, and then at the top end he doesn’t get played at all. He seems to be only good at the middle range, so he might be due some changes, I’m not sure.”

What my performance with Bastion outlined, however, was the need for a solid matchmaking system. Many of the games we played over the weekend seemed to end in stomps (I’ll let you decide on whose foot the jackboot was on), but the few that went close were thrilling experiences. Such is the perils of allowing a random selection of the public play together, but this is not how Geoff intends the final experience to be. But the question of how to best implement this is still in the air. 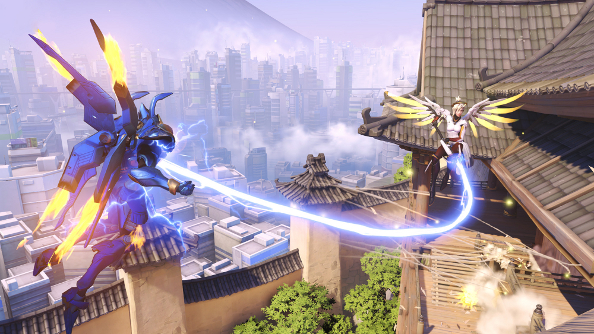 “Hearthstone has the ladder and casual, but if you ask people who play a lot, half the time it feels like the casual is as hardcore as the ladder,” attests Goodman. “So you’re kind of splitting your player pool and you’re not really getting a lot out of it, because you can’t really force people to play casually, to stop them from playing with their best deck. It can be tricky, but we’ve talked about trying to do something like that and create a separate competitive atmosphere, but it’s not as easy as we’ve found to just label it and go because people don’t play by the rules that way.”

Whether Blizzard attempts to create an in-game ladder or not, Overwatch so far has all the feel of a highly competitive game, and all the polish you’d expect from the next in their stellar line of products. If they walk the tightrope through beta and beyond, they could even succeed where Team Fortress failed in a sustainable e-sport.

But as a game on its own, Overwatch is exciting and fun, even when you aren’t pulling off clutch plays. In fact the biggest thrill I had wasn’t watching myself back on a Play of the Game post-match highlight reel. It was watching my character Reinhardt jet boost himself straight through a crucial teamfight, missing every enemy and careening through a barrier and off the edge of the map into the clouds below. It’s that touch of the madcap, mixed with the adrenaline rush of team competition, that will see it soar.