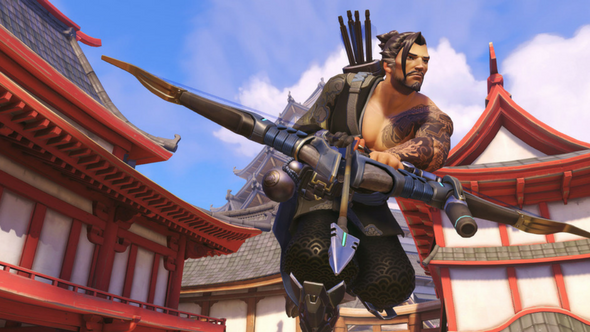 Hanzo’s upcoming rework is far from a secret. We’ve known that Blizzard plan to make changes to the Overwatch character for a while, but what we didn’t know is that the team planned to replace his Scatter Arrow with an ability that could hit you even if you were stood behind a shield.

Mercy is still a viable choice – even after the nerfs.

Overwatch’s principal designer, Geoff Goodman, recently took to the Overwatch forums to answer question about the Hanzo rework. While he said the process wasn’t far enough along to reveal anything concrete, he could explain a few of the potential changes that have already been abandoned.

One of those was something called Piercing Arrow, which would replace Scatter Arrow, and, “which was an arrow that had an extremely fast projectile speed and would pierce through enemies and barriers.” The idea was to give Hanzo some extra sniping potential, but in the end it was shelved as “it was pretty frustrating to be feeling safe behind a barrier and get headshot through it and die.”

Another potential tweak involved simply making a bigger change to Scatter Arrow. Goodman says “the most successful version was one where it had a very fast projectile speed, could only ricochet one time, could no longer split off the floor, and had a much tighter spread.” This option was eventually abandoned because it was difficult to use consistently with many areas of most of the maps. Blizzard also tested the possibility of adding a skill to Hanzo’s reload button, which would sacrifice a few seconds of normal shots to forcibly reload a special arrow.