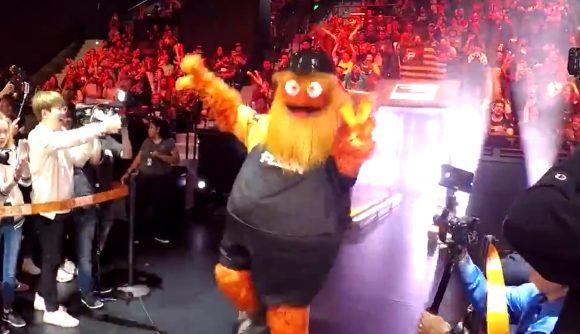 It was only a matter of time – Gritty has made his Overwatch League debut. Yes, the Philadelphia Flyers mascot, bizarre nightmare monster, and hero to the people is now conquering the esports arena, and he made his appearance in yesterday’s season debut. Naturally, he was there to support his local team, the Philadelphia Fusion.

The season opened with a rematch of last season’s grand finals between Fusion and London Spitfire, so everyone wanted to make a notable splash. Gritty led the walkout for fusion, hitting the arena ahead of the team to hype up the crowd for their entrance. Given that I’m writing about it now, it seems the plan was a success.

Gritty’s appearance shouldn’t come as too much of a surprise, since Fusion is actually owned by the same company as the Philadelphia Flyers, Comcast Spectacor. He also appeared in a YouTube video for Fusion ahead of his Overwatch League debut, and I presume he’s still showing up and crashing on random couches across the league. Who knows what’s going on behind those googly eyes?

You can watch that video below, or check out his actual entrance via the Overwatch League Twitter.

Whatever the reasons for Gritty’s debut, it seems to have been a success, and not just because I’m writing this news story about him.

Get competitive: Check out the best multiplayer games on PC

Fusion managed to beat Spitfire 3-1 in the season’s opener, a big turnaround after the team’s fairly decisive defeat in the Grand Finals last time around. Thanks, Gritty.