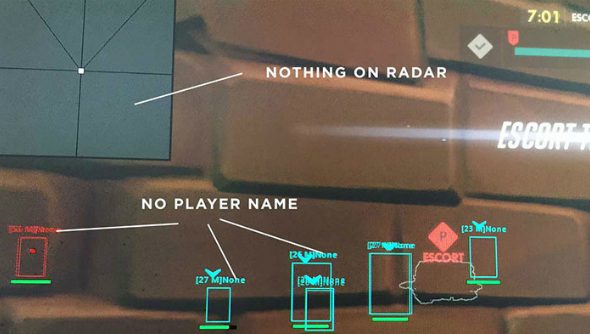 Need to know who to play? Here are the best Overwatch characters in each class.

The hacks take positional player data from the game as it runs and overlay rectangles on enemy and ally positions, kind of like when you use Widowmaker’s ultimate, or Hanzo’s Sonic Arrow.

The fact that these abilities already exist within the game hasn’t stopped some entry-level miscreants from tooling around with hacks though, as Blizzard has already found out.

Not long before the beta finished, community representatives announced that cheaters found during the large-scale test of Overwatch’s servers were being caught and permabanned from the game.

With a high price of entry and single-chance permabans, Blizzard are looking to deter cheaters before they even start.

There have already been numerous high-level hackusations against players on professional teams, though zero tangible evidence has resulted in no action from Blizzard.

The developers have implemented an in-game reporting tool for suspicious activity, and also a submission form on the site for any information players have on hacks.

Just to clarify, a red silhouette on your opponent’s killcam is not a hack, nor is you failing to understand the many, many weaknesses of Bastion or Torbjorn turrets.