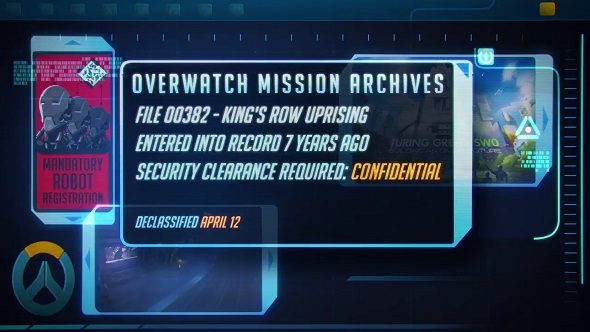 It’s been awhile since the last proper animated short for Overwatch, right? Well, we could be getting a new one soon – perhaps even that Mei one that’s been rumoured for oh so long. Overwatch story guy Michael Chu did say a month ago that new story content was right around the corner.

Bathe yourself in lore by listening to all of the Overwatch voice lines for every hero.

There’s a lot of speculation flying around over on the forums and Reddit about what this is. One popular theory is that it’s a new event. With Blizzard not wanting to tie themselves to a religious date, perhaps the next event will be based around a story concept, and in this case it’s the Omnics, Overwatch’s machine race.

Whatever happened in King’s Row seven years ago seems to be relevant, but nobody has pinned down quite what that is. My money would have been on a new short, but there is some evidence to suggest this may actually be a new event.

Look at the video above, now look at the bottom right – yep, it sure looks like a fresh Tracer skin– there’s a better look at that link. What would an Overwatch event be without a new skin for everyone’s favourite Cockney?