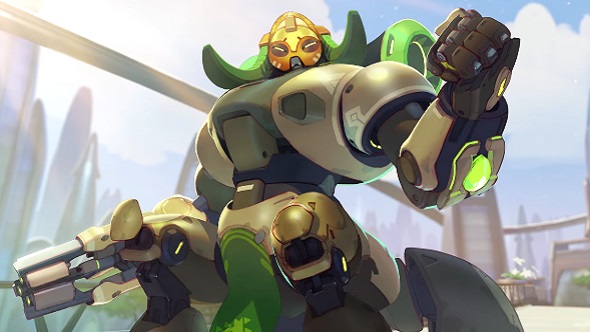 After break-ins in Numbani, a mysterious shopping list and various other clues, Blizzard have finally revealed the newest hero that will be joining Overwatch. Built by child robotic prodigy Efi Oladele, Orisa is designed to act as Numbani’s great protector.

Here how Overwatch was born, in our summary of Jeff Kaplan’s GDC talk.

Built from the remains of Numbani’s decommissioned OR-15 robots, Efi fitted Orisa with a personality core of her own design to help the robot be of service to the city. While Orisa has proven her worth as a defender of the people, her new personality core and omnic inexperience make the huge robot an occasional liability to those around her. Guided by Efi and her growing sense of duty, Orisa stands ready to become the shield to protect Numbani from any threat.

As you can imagine, Orisa is a tank hero who defends her teammates from the thick of the frontline. Her Fusion Driver acts like a minigun, providing sustained damage but slowing her movement as she fires. Her Protective Barrier works similarly to Reinhardt’s shield, acting as a shield wall that can be deployed to stop enemy fire. Her Fortify has her activating special security protocols in her armour, temporarily reducing damage taken and negating any action-imparing effects like slows or knockdowns.

Halt! has Orisa firing off a graviton charge which, when detonated, slows nearby enemies and pulls them towards the central explosion. Orisa’s ultimate is the Supercharger, a deployable device which increases the damage of any teammates that stand close to it.

Combined with fellow buff based heroes like Lucio and Ana, Orisa looks like the perfect hero to break deadlocks and force your team’s position forward. Orisa is now available via the PTR so jump into the test environment to get your hands on Numbani’s stalwart defender.