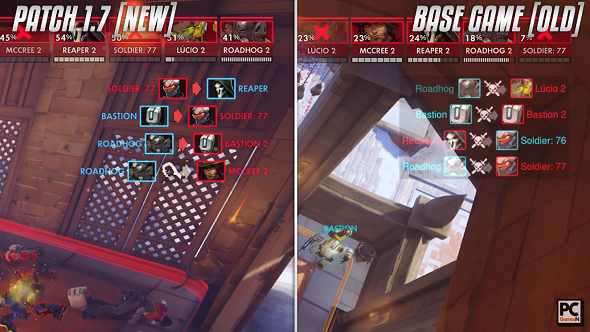 Overwatch patch 1.7 is currently in the PTR, testing out Roadhog, D.Va and Ana nerfs, multi-sprays, an emote wheel, and plenty more. One small change might have passed you by, however: a small update to the kill feed.

Overwatch’s kill feed now looks nicer and gives more information, but you might not initially realise how to read it.

That’s why we’ve put together a video for you, laying it all out. It’s embedded above, so have a watch.

As you can see, normal kills are now represented by a white arrow, while critical hits are shown as a red arrow. Elsewhere there are symbols for ults – backed by a lightning effect – and there are some specific to certain characters.

All in all, it should make the battle easier to read, letting advanced players know exactly when to strike.