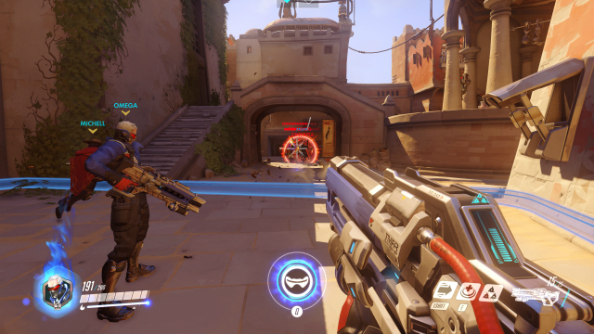 Blizzard’s colourful first-person genre hybrid Overwatch is out now on PC and consoles. It’s the culmination of years of work and several beta tests, and its creators hope to attract a wide audience that’ll sustain its online play for years. But in casting the net wide and working on console versions simultaneously, have Blizzard forgotten about those of us out there who lose sleep over dropped frames and microstutter? The folks to declare anything below a locked 60 fps unplayable, and would rather drink cyanide than turn AA off? Time to load up the game and find out.

You don’t have to spend much time with Overwatch to get an idea of how much depth and polish has been baked into it. It’s not going to nudge The Witcher 3 off its pedestal in outright graphical fidelity, but it features a bounty of PC-specific graphics options that amply communicates Blizzard know how we like to fiddle with our games. Let’s start by taking a look at the main visual options screen: 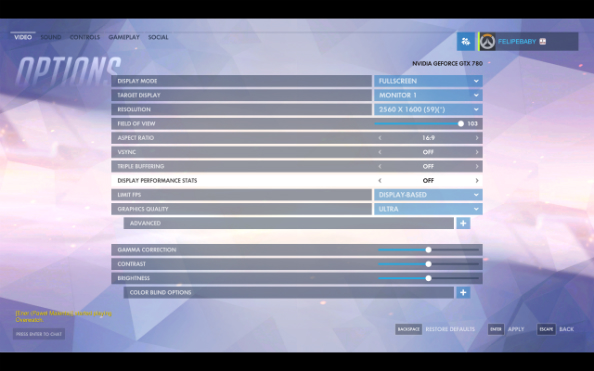 Yep, they’ve given it their all here haven’t they? A few things of note here that don’t find their way into many games’ options screens: a customisable set of colour blind options which let you choose from a range pertinent highlighting colours. Three frame lock options, at 30 fps, matched with your monitor’s refresh rate, or uncapped. Finally, a ‘display performance stats’ option which will give you a readout of fps, GPU temperature, ping, RTT (round-trip time, how long it takes for a signal to be sent and acknowledged) and IND (latency).

Will Overwatch join the ranks of the best FPS games on PC? Is it even an FPS, strictly? Time, and angry commenters, will tell.

Open up the hidden ‘advanced’ tab and you’ll see a heck of a lot more options, from the usual texture and shadow quality sliders to screenshot and render upscaling. Supplementary to those options are five (count ‘em, five) graphical presets: epic, ultra, high, medium and low. It appears Blizzard paid close attention to the Marshall amps turned up to 11 in Spinal Tap. The game runs a quick system check before your first tutorial mission and adjusts settings accordingly, and in the case of my machine it judged very well, giving me around 70 fps.

For this port review I’m playing on a fairly old machine: a top-end Sandy Bridge CPU and a GTX 780 that can still hack max settings in many games at 1080p, but struggles at my monitor’s native 2560 x 1600. It’s worth keeping all that in mind when I reference frame rates specifically, although I’ll be talking more about performance stability and differences between presets than exact frame rates. For reference, I’ve installed the launch day NVIDIA drivers for this game.

With all that out of the way, let’s crank everything up to 11 and see how epic settings look. 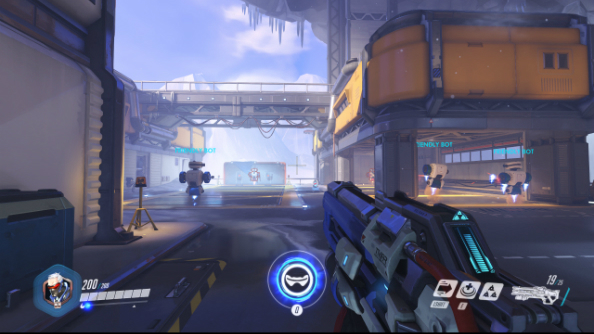 I’m in the training area for this port review, because have you ever tried to replicate scenes in an online shooter? Exactly. Interestingly, the graphics can be ramped up still further than this hyperbolic preset by notching render sampling up from 100% (your current resolution) up to 200%. This absolutely tanked my frame rate, literally down to 1 fps. It might even be a bit much for GTX 970s as it requires a lot of VRAM, but come the release of NVIDIA’s GTX 1080 and its 8GB of GDDR5X memory, supersampling by 200% should be a breeze.

You can push the antialiasing quality higher too, although as I’ve said in previous port reviews, personally I can’t tell much difference between AA modes and they tend to have a big impact on performance.

So, things to note: the details on the floor to the left are currently 3D bump-mapped, but will become 2D textures as we descend through the lower presets. There’s a liquid sheen to the floor, like morning dew, that looks especially impressive here and disappears entirely from medium downwards. The wiring hanging down from that bridge is a good example of the AA working hard – at low settings, the wires themselves don’t even appear. Shadows are also much more complex here than we’ll see later.

The details on the gun don’t differ as dramatically between presets though, and this gives the initial impression that not much is changing as you turn advanced settings off. It’s a clever touch from Blizzard to keep the game looking nice on low-end systems. As for my own rig, I’m able to get between 45-50 fps with this preset, which I’d say is just short of my preference for an online shooter. I’d need to crank it down a few notches. 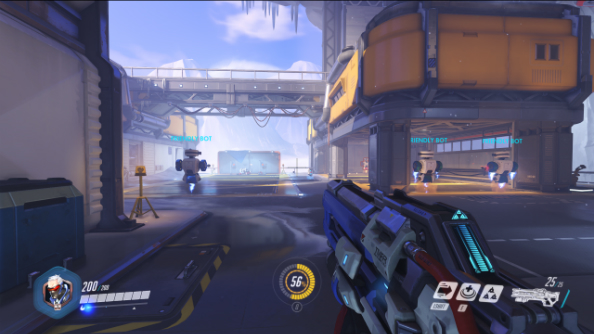 This is like playing a particularly devilish game of spot the difference – there’s really not much to see when selecting the ultra preset instead of epic. The wires still look well-antialiased, the floor still has hatch details and that watery sheen, and the smoke effects surrounding those jets on the bots look like they’re rendered using the same technique as before.

The performance yields are good, though – here I’m able to hit a fairly consistent 60 fps that isn’t affected by lots of on-screen characters or explosions. It’s the preset I’d use for online play, and that ain’t half bad for a Frankenstein machine of 3-5-year-old parts. 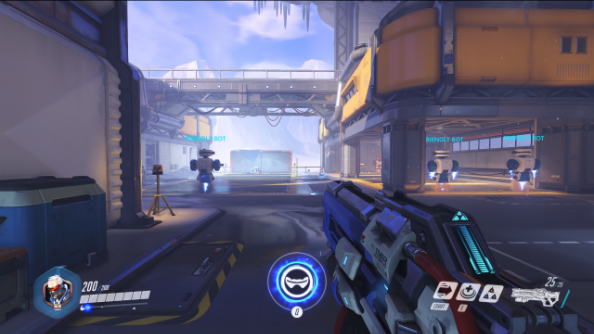 There’s just one AA option in Overwatch, SMAA, and here it’s been turned to low. Dynamic reflections are now low too, while anisotropic filtering is at 4x rather than 16x. Elsewhere it’s a mix of medium and high texture, lighting and shadow options that just about preserves the look of the game as it appears using the Ultra preset. You’ll notice this a lot: while the difference between epic and low preset screenshots is dramatic, it’s a much subtler change when you dial down just one preset at a time.

We can see the smoke coming from those bots’ jets looks simpler now, and weapon shading appears less complex too. Elsewhere there’s not much to indicate we’ve just lowered the graphics settings.

Performances are good again, this time hovering around 70 fps on my machine. Or, to put it another way, we’ve almost doubled our fps by hopping down two presets. 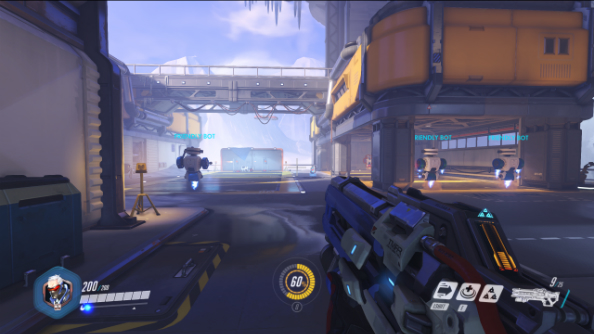 Local reflections and ambient occlusion stay on no matter what preset you choose, but elsewhere anisotropic filtering has been lowered to 2x, dynamic reflections are off and effects details are set to low. The latter’s actually a bit easier to observe in-game when everyone’s firing off their Q and E abilities, but trying to screenshot that is akin to herding kittens, frankly.

You can see the AA isn’t quite good enough to hide the jaggies on the bridge those wires are hanging off (look at the full-size picture to see what I mean) and the quality of lighting on surfaces has taken a visible step downwards too. Another good indicator of the fidelity difference is the yellow light to the left – at epic settings you can see the bulb clearly and it casts a believable beam; here it’s a low detail object that emits a faint yellowish hue. 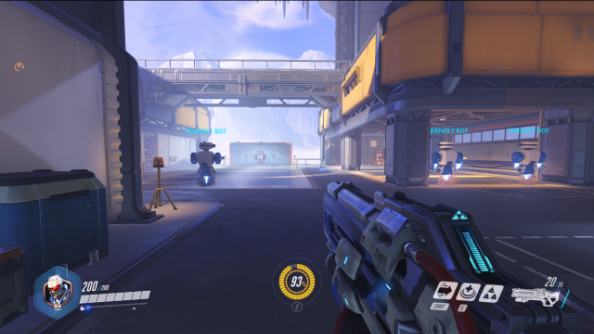 Oof. We’ve hit the bottom of the barrel here – or have we? In fact, there are a number of options still to be lowered if you’re still wrestling for decent performances at low settings. AA is at its lowest setting but still enabled, while texture quality remains high. My system had more frames than it knew what to do with at this point, into 120 fps territory, but if you’re still not getting a smooth enough frame rate it’s worth knowing you can dial it down further.

Entire aspects of the environment have now disappeared, such as the wires and the water on the floor. There’s no hatch to our left anymore, and that yellow light isn’t trying hard to convince anyone.

That said, experiencing Overwatch at running pace in low mode, it doesn’t look bad. It doesn’t even look dramatically different to epic – again, thanks to a locked-in detailed weapon and an art direction which doesn’t require high details on every surface and object.

Stepping outside the graphics menu – scary as that is – there’s nothing to fault in Overwatch’s controls menu, either. Individual bindings are all remappable, and everything from mouse sensitivity to a particular control input can be customised for each hero. Mouse aiming feels low-latency and responsive, with a sensibly low default sensitivity setting that can be ramped up to taste. This game does hate FRAPS, though. It’s an increasingly outmoded capture tool now, but it appears we’re actually getting to the stage where games warn against using it before loading. Never mind – there are plenty of other ways to take a screenshot.

It’s a pass with flying colours for Overwatch. Performances were great on my mid-range system, there’s a lot of scope for customisation, and a love of love for the platform evident throughout the game.