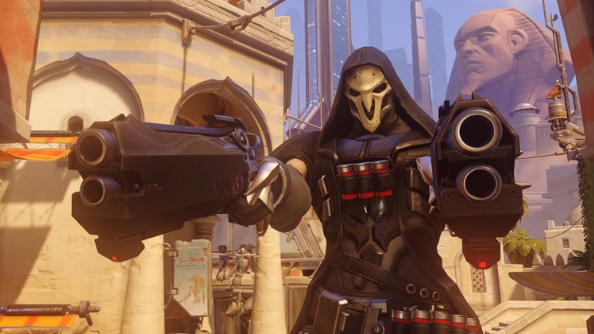 If you played Overwatch during the Summer Games event last year, you might have noticed a voice line that showed up for Reaper. Everyone’s favourite emo started muttering the line “it’s in the refrigerator”, and it left many fans, especially outside of the US, a little baffled.

This list of the best old games are in the refrigerator – some of them are still surprisingly edible.

“I’m usually coy about this, but I’ll go ahead and give you the answer,” he said. “It is a reference to the great Chick Hearn, the voice of the Los Angeles Lakers basketball team. He has a very famous saying – you should look it up, it’s very amusing. At the end of a game, when the Lakers are going to win, that’s what he says.”

As you can see in the video above, that definitely is what he says. He also goes on to talk about jelly wobbling away, which would have been amazing to hear Reaper say in his gravelly grunts.

“Reaper, as we now know, was Gabriel Reyes, who lived in Los Angeles,” explained Chu. “That’s just a little homage. The voice line was added during the Summer Games event last year, so that’s the tie-in to it. I feel like if you don’t know that reference, it kind of fits for him, and if you do understand his character and the reference, it’s just perfect.”