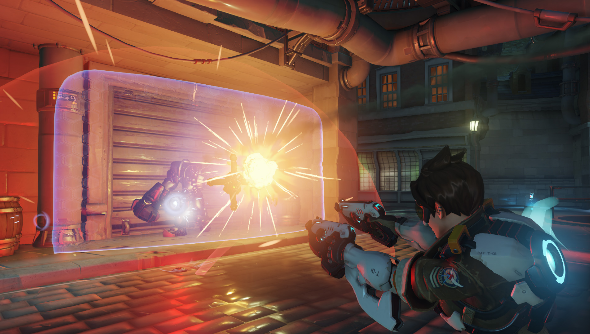 In a panel after the initial reveal, game director Jeffrey Kaplan and senior vice president of story Chris Metzen discussed some of the finer details of the game, allowing us to paint a more coherent picture of how a game of Overwatch will play out. But what is very clear is that the game places a great emphasis on characters.

Using the character of Tracer – the quick-talking British girl from the trailer – as an example, Kaplan explained how the basic rules of characters apply. Each has a unique weapon and a small handful of powers to use as they rampage across the battlefield. Tracer employs dual pulse pistols, which are exceptionally fast firing machineguns for devastating close attacks. She then has the Blink ability, which much like Dishonored’s own version of Blink, will catapult you 10m in front of your position. With three charges, it can be used sparingly or three times in success to teleport 30m across the field.

Recall allows Tracer to zip back in time by three seconds, which can help confuse enemies and get her out of a tight spot quickly. It also resets Tracer to whatever status she was three seconds ago, meaning that massive damage can be instantly healed thanks to Recall.

Alongside their core abilities, characters in Overwatch have an Ultimate ability, much like their MOBA counterparts. For Tracer this is pulse bomb, a sticky explosive with a small-but-destructive explosion radius. This can only be used when the ultimate meter has been filled during play. 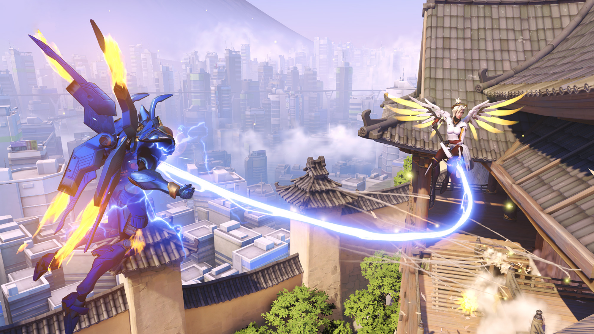 Like all MOBA and class-based FPS characters, each of Overwatch’s characters fit into a category. Kaplan made it clear though that Overwatch was less clear-cut with classes than traditional FPS games though, and were there to help players understand the basics, rather than apply a strict ruleset to the game.

The categories in Overwatch are Offense, Defence, Tank, and Support. Offense characters like Pharah, Reaper, Tracer, and Hanzo are designed to harass enemy team members, breaking up groups to make it difficult for them to achieve objectives. Defence characters are designed to patrol choke points, thinning down the enemy ranks with emplaced machine guns.

Tank characters such as Reinhardt and Winston lead the charge using energy shields that team members can shoot through, but deflect enemy bullets. Winston can lay down a bubble shield for teammates to use, whilst Reinhardt can erect a personal riot shield that members who stick with him can also benefit from.

Support heroes like Zenyatta, Mercy, and Symmetra offer services like heals and buffs to keep the party going. Symmetra is an interesting hero who can create constructs from light Green Lantern-style, allowing her to instantly bring new tech to the field. Mercy is a combat medic with an ultimate skill that brings every team mate back to life.

These characters are used in 6v6 matches on maps based in hyper-styled versions of the real world, so expect to see London busses with jet-boosters and the temple of Anubis on your travels. You can change character at any life change in the match, so you’re not forced to lock-in to a character as in a MOBA for the full match. Indeed, Blizzard encourage players to mix and match and use the unique abilities of each hero over the duration of a game.